Like another piece of discarded trash tossed to the side of the road, a young puppy lay prone, unnoticed. At first glance I thought she was dead but then I saw her labored breathing and heard her pitiful whimper.

Passers-by did just that–passed by without as much as a glance in her direction. Not until I sat down next to her did any human take notice. Sadly, it was not the dying puppy that caught their attention but the curious sight of a foreigner sitting on the ground comforting a dying dog.

I have come to accept that dogs do not hold a place in the hearts of many people. Unfortunately, at least one religion teaches that dogs are the incarnation of a person who in a former life did something unspeakable. As result, that soul reincarnates in the body of a dog, destined to spend a lifetime homeless, scavenging for food, and in many cases, brutalized by humans.

With the influence of western culture in Asia, some are beginning to see dogs in a bit of a different light. But for one little puppy it was almost too late.

While sitting with the puppy, paying homage by witnessing her passing, I watched the sea of people walk past. Some were curious, some smiled. The westerners showed concern, most Asians were repelled. I was appalled.

After a few minutes her breathing became shallow. She showed no sign of consciousness; she was comatose.  Ten minutes passed, then fifteen and then thirty. Sensing the need for this pup to die in a quiet, peaceful place, I picked her up and carried her home. I wasn’t sure she would survive the short walk but I knew it was better than lying on the side of a gravel road surrounded by indifference.

Interestingly, many local Nepalese I passed on my way home expressed interest, even concern. They wanted to know what happened to the pup. When I said “pita”–someone hit her in the head with a rock–they were silent.

I prepared a soft bed with a thick winter coat and some towels and laid her lifeless body down on what I thought would be her deathbed. A dose of Arnica Montana seemed to slow her rapid breathing and helped ease her pain. She wasn’t able to see or hear me and I wonder if she even felt me. But I did my best to surround her with as much love as I could as she made her transition to the other side. 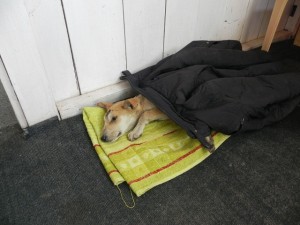 A few more doses of Arnica Montana and she started breathing normally and dropped into a deep sleep. And then to my surprise, she woke up. She was able to drink but barely able to stand without falling.  Her forehead was swollen and painful.  She seemed to have suffered some brain trauma because her motor skills, eyesight, sense of smell and hearing were all affected.

Quite by coincidence, a team of vets that was providing a rabies clinic in the area, found out about the pup and came by to examine her. They confirmed that a blow to the head caused a deep-seated injury resulting in brain trauma. Only time would tell if she would recover. She received medication to address possible infection and pain, and to reduce the swelling in her brain. 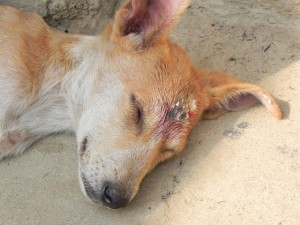 She rested a lot, ate and drank well, but found walking a bit challenging. Due to the trauma she kept walking in circles to the left.

It has been a week since I found “Little Girl” dying in the road and she is steadily recovering. Her circling to the left is nearly gone and her coordination is at about 90 percent. Her hearing, sight and smell are still affected but she is slowly regaining them as well. 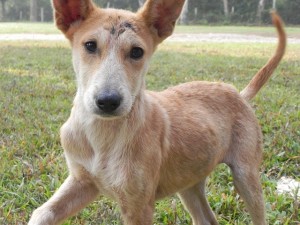 This little street puppy has been an unexpected blessing, and now comes the greatest challenge: finding a good home for her in a culture not accustomed to caring for dogs, especially one with special needs.

While the search to find her a good home continues, Little Girl will live with me, recuperating and learning to play tug of war with a sock. 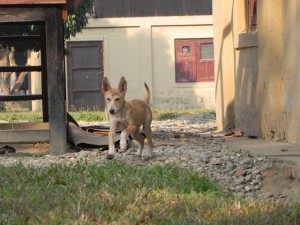