Each day is filled with so much joy and so many surprises, writing it down usually escapes me because one wonder is quickly followed by another. But what happened today feels extraordinary, requiring written documentation.

Most of you know Tarra to be a chatterbox. She expresses herself vocally, all the time! Her endless chatter is one of her most endearing qualities and one that I have always encouraged.

When Tarra was much younger, before sanctuary, I remember being chastised for allowing her to talk. The claim was that she would be spoiled, talk back to me and eventually become dangerous. I saw it differently. Her enthusiastic chattering felt like her way of communicating what she was experiencing and feeling. I encouraged it.

Although Bo has been known to chirp and talk a little, it is not something he does on a regular basis. In fact, he goes for weeks without saying a word.

Experiencing Bo’s lack of verbal communication has caused me to question how he feels. Is he secure and comfortable? He appears content, but why is he silent?

I was hanging out with Bo and Tarra in the habitat, while contractors installed fiber for our expanded Elecam project on the other side of the fence.

Bo and Tarra were both very interested in what was going on but after about an hour, Bo lost interest and started grazing in the opposite direction. He took a few steps and let out a one syllable high-pitched chirp.

I immediately responded, praised him for talking and returned to watching the contractors.

But then he chirped again, which got my full attention.

A conversation ensued. Each time he chirped, I responded, and he’d chirp back. This happened multiple times. We were having our first two-way conversation. It was exhilarating.

I was filled with an indescribable joy of feeling this was a profound breakthrough. Bo was open and soft, engaging me for the first time in such a personal way, and I was beyond honored. 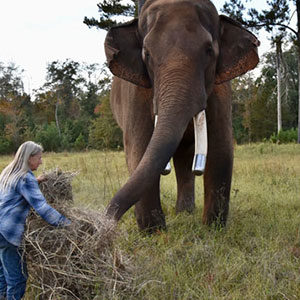