A Flash In The Dark! 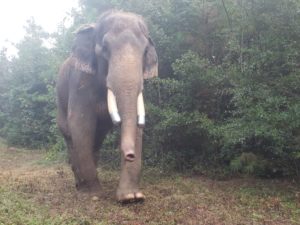 Last night on my way to bring Tarra and Bo their night feed, I sped down the paved road which divides the 100 acres from the 750, deep in thought. A flash of light to my left caught my eye. It was Bo, the headlights of my UTV reflecting off his tusks. But he wasn’t just standing there grazing. I had to do a double take and realized he was racing the UTV. Squeaking and trumpeting with complete abandon, he was having so much fun! Of course, at that point so was I.

What a sight he was, this magnificent playful giant, racing along the fence line shoulder to shoulder with me. No worries, he was on his side of the fence, and I was on mine.

I broke out in laughter, encouraging him which only egged him on. His playful trumpets were deafening. I cannot imagine what the distant neighbors thought. Bo raced, and I raced, and when we arrived at the barn, he let out a series of powerful trumpets and spun in a triumphant circle dance…I guess he won!