Yesterday when Tarra was getting a drink, Mala was doing her regular leg, foot, tail and trunk inspection. She calmly walked around Tarra in her usual way, under her belly and around her legs, sniffing her feet and her trunk, looking up at her face curiously. Tarra stood perfectly still and did not utter a sound. This is her way of making sure that she doesn’t frighten Mala, or any other dog who is brave enough to approach. She just loves it when Mala comes around and they both appear to savor every bit of the attention they share.

When Tarra was done drinking and I was about to leave she reached her trunk toward my hand and started chattering. She knows that when I leave, so does Mala, and she apparently had not gotten her fill of dog attention. So, she took my hand with her trunk and ushered me to sit on the ground. You get it, she holds my hands and gently but firmly directs me to sit on the ground under her chest in front of her legs. Imagine an usher in a dark theater firmly directing you to your seat and you’ve got the picture. She has done this a million times.  I can’t help but laugh, tell her not to hold my hand SO tight, and feign resistance as I wholeheartedly yield to her wishes.

Tarra knows from experience that with me sitting directly under her chin she’ll be involved in doggie play. Of course, I know the drill, Tarra holds my hand so that when I play with and pet Mala, Tarra is petting her as well. Ingenious, no? She is so clever. By using me as the middleman, Tarra gets to pet Mala! And most times, just when Mala is all played out, she will sprawl out, frog style, right in front of Tarra and allow her to gently rub her belly.

Tarra so enjoys Mala’s company that I never refuse her desire for doggie play. Being the middleman is my part, which I find both rewarding and an honor. 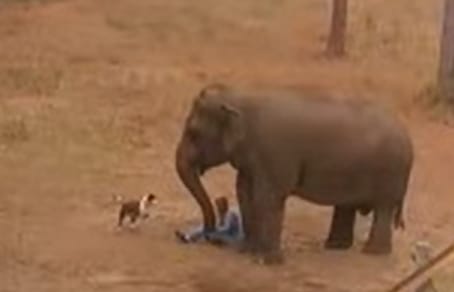 This photo was captured from the EleCam. Its blurry but gives you a visual of Tarra’s ingenious manipulation!