My first morning in Assam, I awoke to learn there was an elephant emergency.

Thirty-five-year-old, Bahabur, a skilled koonki (elephants trained to assist mahouts in the capture, training and management of wild elephants) who only days before successfully pulled a wild rhino from a mud bog nearly lost his right ear in a fight with a wild bull elephant.

Bahabur is intimately familiar with both captive and wild elephants. He lives with a non-related herd of koonki elephants whose job it is to assist their wild kin by participating in human-elephant conflict mitigation.

Many elephants are killed as result of crop raiding–poisoned, shot, electrocuted, their mouths blown apart by bomb-laden food. These koonkis are the front line of protection for their brethren and the villagers whose encroachment and farming activity create such a dangerous situation for everyone involved. 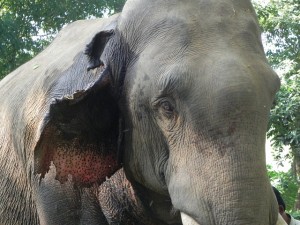 Bahabur stood motionless, his right ear ripped in half, dangling painfully under its own weight. The cartilage was ripped apart at the top ridge of his ear. The flesh that covered the back of his ear was torn from the ear, creating a huge gaping pocket between the skin and cartilage. It was a seriously gruesome sight and no doubt painful. 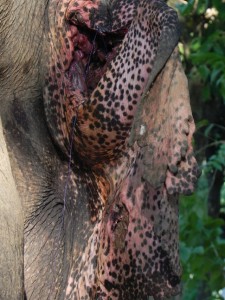 The attack had happened eight to 12 hours before, after Bahabur, just coming into his annual musth season, had uprooted his tether tree and headed straight into trouble.

Mahouts tracked Bahabur and received no resistance when they instructed him to return home.

The expert mahout staff managed Bahabur while Drs. Bhupen Sarma and Anjan Talukdar assessed the injury. In a natural self-medicating fashion, Bahabur had packed the gaping wound with dirt, which needed to be removed before surgery could begin. 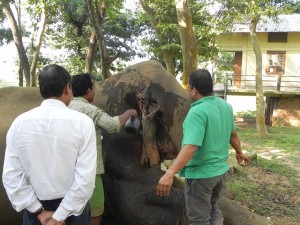 Without complaint Bahabur reclined in a half-sitting position, giving the veterinarians access to the wound. No one yelled, hit or in any way badgered Bahabur. Instead they spoke calmly and confidently, patiently waiting for Bahabur to respond to their commands and get comfortably situated.

In soft tones, treatment instructions were given. The wound was cleaned, flushed out with clean water and Betadine.

The veterinarians and mahouts worked seamlessly together, voices low as they repaired the half-severed ear of this full-grown bull elephant. 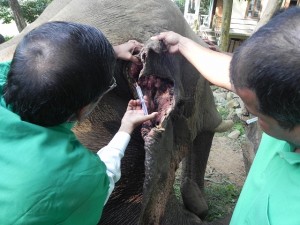 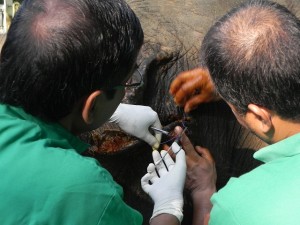 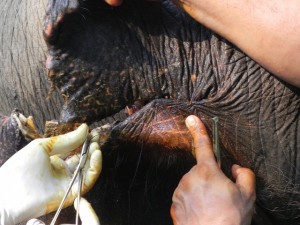 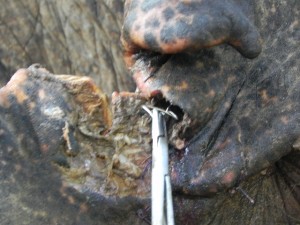 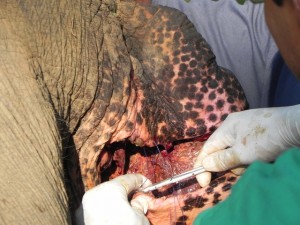 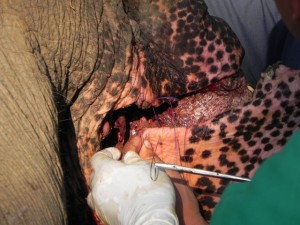 From time to time Bahabur needed to stand in order to readjust and, I believe, to distract himself from the pain. After a few seconds standing he would once again respond to the patient command given by his mahout to recline.

With only a local anesthetic to deaden the pain in the area to be sutured, Bahabur’s ear was expertly reconstructed; the torn cartilage stitched together with sutures and ripped flesh reconnected. The result was amazing. 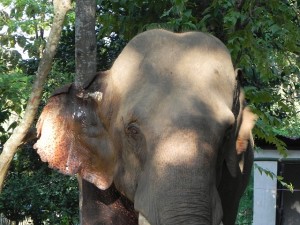 Bahabur is a mesmerizing example of this highly evolved, profoundly intelligent species, who for so long has captured my respect and awe. 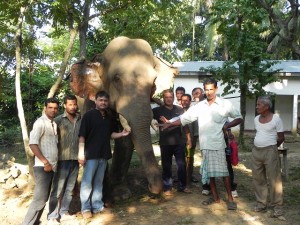