Haatha, hati, hatti, hathi, are all words referring to the Asian elephant. Kipling, in his infamous Jungle Book, gave life to his supporting character, naming him Colonel Hathi.

There is something pure and powerful about the Colonel as the representative of an entire species. He becomes more than himself: he is the conduit to the world of elephants, their ancient culture and lives.

I am continually amazed by the impact elephants have on people. Even those who have never been in the presence of an elephant can become obsessed with protecting them. It is as if elephants can reach into your soul and light a spark that defies reason. Their culture is complex, their nature compassionate and resilience indefinable.

Recently I experienced a scene that touched me deeply. I was at the Bannerghatta Biological Park (BBP) in India to inspect the chain free-enclosure I’d designed for Sunder and his new family.

The staff excitedly told me that a young wild elephant had entered the enclosure 15 days prior and remained inside. I found this disconcerting. I imagined the young bull to be frightened and holed up in the back reaches of the 122 acres, hiding from the scary humans who surrounded the entrance and exit of the enclosure.

As I walked the fence line inspecting the corral, there were signs of another inspection. The young bull had made his rounds, leaving footprints and signs of dusting and foraging along the fence line on the inside, but no damage. I had no doubt that he was looking for a way out.

Yet, although the fence was newly completed and would not be operational until after my inspection, this jungle, pronounced junglee (wild) hatti (elephant) did not breach it. The solar power energizer had not yet been turned on, the fence wasn’t yet powered, so the bull would have felt no discomfort if he pushed through it to escape. I was curious why he hadn’t.

About two hours later, the mahouts became active, calling to each other and moving to the exterior of the enclosure, closer to the fence line. The mahouts understand the danger of wild elephants; I was told they were afraid of this hatti because he was wild.

When I first saw the jungle hatti my heart melted. He was just a kid, maybe 10 years old. His skin pigment was much darker than that of the two captive-held BBP residents who accompanied him into the clearing. The three stuck together like glue, with the jungle hatti sandwiched in the middle.

The mahouts nervously checked their escape routes. The jungle hatti tensed when they started yelling to warn each other that the wild one had emerged from the forest. I was in awe at the scene unfolding.

Once the hatti and his friends converged with other herd members, the tension in the air dissipated. All the elephants appeared quite comfortable with their wild cousin. In fact, they seemed to know each other quite well.

Shiva, the baby of the herd, could not get enough of his wild friend. He followed him around, pushed and shoved on his legs and trunk, trying to get the jungle hatti to play. What a sight — tiny Shiva and this wild 10-year-old, acting as if their interactions were common place. And perhaps they were.

During the daytime hours, the BBP herd is on exhibit in the drive-through safari section of the Park, corralled in a pasture area with a sizable pond. The new 122-acre chain free enclosure eliminates the need for the elephants to be chained during the day to contain them.

But at night, the entire herd is released in the nearby National Park to forage and commune with wild elephants. Captivity is a burden for elephants but this arrangement, releasing the elephants into the wild overnight, is genius and the healthiest captive situation I am aware of in India.

Throughout the day, the jungle hatti continued to interact with the entire herd. When Shiva became too much of a pest, as a younger sibling sometimes is, the jungle hatti pushed Shiva off his feet. Without a single vocalization Shiva’s mother and aunt instantly moved in on either side of him.

I realized I was holding my breath when the elephants relaxed and returned to eating. Shiva got up, brushed himself off and went right back to pestering the jungle hatti.

It was then that I understood the relations was familiar. For whatever reason the jungle hatti left his biological family and had joined the BBP family. And they had accepted him.

At 5pm, amidst anticipatory rumbles and trumpets, the food truck arrived. Buckets of prepared treats were unloaded, each containing supplemental, softball-size rice balls. Elephants and mahouts alike were in high gear, vocalizing and dashing around on opposite sides of the corral fence.

The young jungle hatti resumed his position sandwiched between the two other juveniles as they raced back and forth in unison, moving like a perfectly synchronized school of fish. His head and tail were raised, his eyes bugged. He was afraid, prompted by the noisy humans on the other side of the fence.

The jungle hatti and his bodyguards hung back while the other elephants were called from the corral. There was organized confusion as the elephants ran in every direction to their appointed mahout and food bucket. As mahouts gently placed the freshly prepared nutritious food balls inside the gaping mouths of their respective charges, the jungle hatti and friends continued to pace the inside of the corral.

Finally, it was time to see if the plan would work. The empty buckets had been gathered and, along with the nervous mahouts, were sitting in the back of the truck that stood ready to speed away if necessary.

As the jungle hatti and his escorts made a wide circle back toward the lake, one brave mahout opened the gate.

The jungle hatti nervously approached the open gate with his friends close on either side. At one point he broke ranks and turned to run away, but his friends quickly sandwiched him and helped guide him out through the open gate. He was seriously frightened but clearly he trusted his friends.

Once through the gate, it was all butts, raised tails and trumpets of excitement as the entire herd stampeded off toward the National Park.

The mahouts were all smiles as the elephants disappeared over the hill into the forest.

I have never before observed a more powerfully moving sight. This herd of elephants–some wild caught decades ago, some rescued from temples, some captive born at BBP–and one wild boy who chose them for his new family. 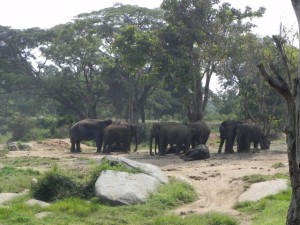 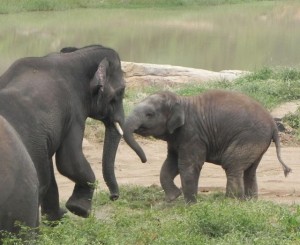 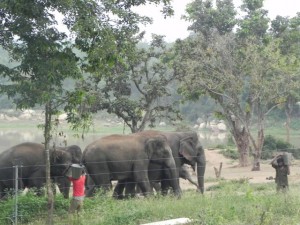