I’ve seen footprints and elephant boluses and heard stories about the herds of wild elephants that frequent the area, but last night at 10:35pm I heard proof — my first wild elephant trumpet. It sounded like s/he was just outside my front door. The familiar sound brought an instant smile to my face. I stood motionless on my porch listening for more, any other sign of elephants. But there was only pitch dark and silence. I figured the music maker had moved on. But honestly, just hearing that one joyful trumpet was enough for me, for now.

I’ve been thinking deeply about our project, wondering what impact, if any, it will have on the wild ones. Of course my desire is to do no harm, so educating myself regarding wild elephant activity in the region is imperative.

This morning as I recounted the elephant music of the night before, the resident security man came roaring up on his scooter to announce that he had seen a herd of elephants. The night before they entered the property through a wide opening in the forest wall and proceeded to feast on bamboo, a fruitless mango tree and the huge Banyan tree that dwarfs the outdoor classroom area used occasionally for schoolchildren from Bangalore. 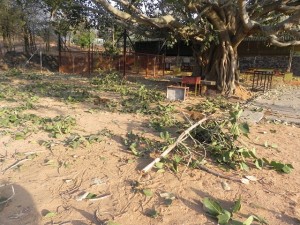 Several piles of manure suggested the size of the herd and age of some of its members. From the fertilizer they left behind it appeared that this herd included at least two youngsters, one only a few months old. 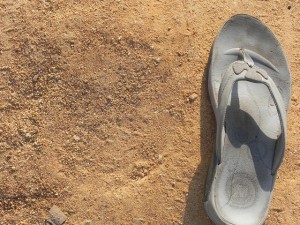 This sandal is a size 7, so you can see how small this calf’s foot is.

Out of curiosity we tracked the elephants’ movements, following piles of manure, footprints and discarded vegetation. A horizontal chain that extended across a dirt road lay in two pieces on the ground. The heavy lock that previously held it together was splayed open and discarded. Most likely one of the larger elephants stood on the chain until the lock gave way. 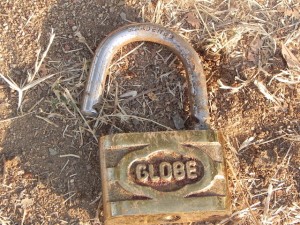 The amount of damage done was nil unless you consider leaf litter and a couple of broken branches a problem. After filling their bellies, the herd appeared to leave the way they entered.

I am getting such an education — wild elephant lifestyles in the Bannerghatta forest 101. Living on the land shared by wild elephants is a gift and a responsibility. I look forward to the days and weeks ahead. I am realizing that this project has the potential to be much more than anticipated. One world, one elephant at a time has taken on a much more complicated meaning.

One world, one elephant at a time — both wild and captive.