Anyone watching Tarra and Bo on the EleCam today finally got to see what Bo does when he’s at the migratory bird pond.

Today he was browsing. It was fascinating to watch him rummage around and through the variety of live vegetation of bushes, trees and vines. Imagine his wonder in realizing this is food, there for him to eat at any time.

Freedom of choice is not limited to where Bo wanders and who he socializes with. It includes what he eats as well. Selecting, collecting and eating is a fulltime job for an elephant. In nature, elephants are known to engage in eating activity nearly 20 hours of the day. And Bo proves this to be true.

Until today I’d not been able to observe Bo browsing. I must admit that I was seriously impressed by his grazing skills immediately upon his arrival in September. I guess with so much grass to graze, browsing was not a priority. But with cooler weather the grasses are becoming dormant, shifting the eating option to browsing.

I suspect that browsing takes an added set of skills. The first is recognizing that those bushes that block your path, the vines that catch on your ears and head and the tree branches that you thought were simply for scratching are also delicious and nutritious food.

Today was thrilling because Bo was in full Elecam sight for an extended time while he browsed. He demonstrated how he first selects and then collects the different vines, branches and bushes. Using his trunk, he grabbed his selection and tugged until it broke free. The vines appeared to be the greatest challenge since they were wound around bushes and tree branches and difficult to break. But Bo’s persistence won out and he browsed to his tummy’s content.

Oh, the lessons they teach us if we take the time to observe! 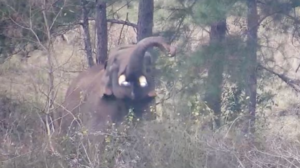 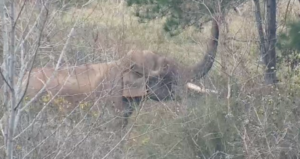