Elephants I have known | Elephants in the U.S. | Sanctuaries

Bunny — what a sensitive and loving lady. It was a joy to bring her to the Sanctuary. Her immersion into the habitat and bonds with the other elephants exceeded even our wildest dreams. She made an immediate and complete transition into Sanctuary life. In fact, she was the first elephant to sleep under the stars and was responsible for her sisters beginning to sleep outdoors overnight as well.

I spent five years working for Bunny’s release from the Mesker Park Zoo in Evansville, IN. The zoo had been her home for four decades. From the time my effort began, I placed a weekly phone call to the zoo to discuss Bunny and her possible relocation. Ron Young, the zoo director, and Ted Grannan, the assistant director, were gracious but firm: Bunny would never leave the zoo.

They continued to accept my calls and humor my periodic visits, but their response to my interest in discussing Bunny’s relocation was a consistent no. I realized that these were kind and caring people. My goal was to familiarize them with the Sanctuary so they could understand what we had to offer to their beloved Bunny.

On one of my many visits to the zoo, Bunny was having “play time” with her next-door neighbor Daisy, a hippo. They had lived in adjacent enclosures for four decades. On special occasions Daisy was allowed into Bunny’s yard for a visit. It was quite cute to watch, but sad to realize how these two had to rely on another very different species for companionship. Bunny gently herded Daisy around the yard, as much as one can herd a hippo, with Daisy paying little attention. 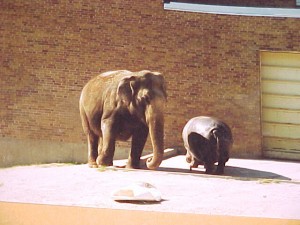 My persistence began to pay off, but in a roundabout way. Ron soon began passing my phone calls off to Ted, who remained pleasant and engaging. He would listen patiently to my latest update and end the conversation with the zoo’s mantra, “Bunny will never leave the Mesker Park Zoo.”  My no-pressure-but-let-me-tell-you-this approach was sincere — and effective. We shared a common interest in Bunny’s welfare, which soon brought us closer together. My message began to get through and I saw that Ted was beginning to question the wisdom of their position.

Until this time, I was told that Bunny could not be moved for a myriad of reasons, including that it would break her heart to leave the zoo. With stories about our other retirees as evidence to contradict that concern, Ron finally admitted that the idea simply could not be considered because the Association of Zoos and Aquariums (AZA) would not allow it.

After years of open communication and education I was able to demonstrate that Bunny not only deserved to move to the Sanctuary but her very health depended on it. Her enclosure offered limited natural substrate and her pool had been empty for years. As result of years spent on the hard surfaces of her exhibit, Bunny had developed a chronic foot disease that could soon develop into osteomyilis. This captivity-induced disease is responsible for the deaths of nearly all adult captive Asian elephants living in zoos. Bunny was on her way to being yet another statistic but I knew that Sanctuary life could spare her such a fate.

Bunny was surrounded by a loving staff, attentive veterinarian and adoring public. They began to grasp the gravity of Bunny’s condition and, ultimately, the people responsible for Bunny’s care, including Ron and Ted, became the champions for her release.

On September 29, 1999, Bunny arrived at the Sanctuary. Her retirement was celebrated by two communities united by one deeply loved elephant.