Chang Yim has been in training for less than two weeks. His progress has surprised everyone… except Karl and me. 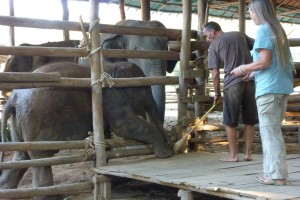 Lek returned to the Park today after being away for a few days. She commented on how calm Chang Yim has become. Indeed, he has shifted, no longer an angry young boy.

Target training has helped to boost Chang Yim’s self-confidence and trust in Karl, the significant person in his life. It has been a gift to watch Chang Yim relax instead of always being on the defensive, quick to display rebellious behavior. His bouts of aggression have become an oddity instead of the norm.

Positive reinforcement training has had a marked affect on Yim’s attitude and behavior, but other changes in his management have contributed to his improvement as well. Visitors are no longer allowed to approach him without a mahout present. No one plays the “chase me” teasing game responsible for Chang Yim’s pushy behavior. Inexperienced mahouts who ignorantly antagonized Chang Yim have been told that their treatment of Chang Yim is inappropriate. All of these changes have made Chang Yim feel safe.

We are very proud of Chang Yim. From his calm demeanor and sparkling eyes, it seems Chang Yim shares that pride.