I put off writing about Corbett National Park because I wanted to be sure my entry did it justice.

This park was perfect in nearly every way. Even the guest houses were fenced to ensure wildlife protection. The first night, just after dark, I learned why.

Under a cloak of darkness a young tusker approached the entrance to the compound. His ivory tusks gave him away, glistening under the fluorescent moonlight. He stood perfectly still, close enough to touch, close enough to drop a heavy tusk on the hot wire, which would immediately short out and give him access. He waited, I waited. He turned and walked away, hopefully to return another night…

The flight to Delhi was uneventful, even pleasant. I realized the comfort I derive from familiarity. I was in my element, having flown more times than I can remember. My heart went out to these people wandering aimlessly through the plane trying to figure out where to sit. As I watched, it struck me that some passengers — in fact, most of the Indian passengers — were having problems because aisle and seat numbers were in English.

Within minutes of arrival I was in my car and on the way to Corbett Tiger Reserve. This park is known for its tigers and elephants. I arrived too late in the day to go into the park, which is where my lodging was, so I stayed in a guest house. It was hot, sticky and not inside the park, but I knew it was a temporary delay. The next morning I found myself struggling to communicate with the young man who had been hired to drive me, the guest house manager who was trying to get me checked out of my room and a tour guide who showed up to help me. I was not sure if the guide had really been sent to assist me or just saw me as a potential tour client. So I made the best of it and got in line at the Forest Department office, hoping I would get a ticket inside.

As luck would have it, an English speaking man was in line in front of me. Go figure — for the past many weeks I had seen very few non-Asian people, most of whom spoke English as a second language. When I balked at booking an overnight in a coed dorm room, the man turned to me and said — in perfect English, I might add — “My wife and I are booking the dorm room if that makes you more comfortable about booking there.” Yes, that did it. If an English speaking woman was going to be in the dorm room that would work for me. It turned out that the three of us would spend a fair bit of time together over the next two days.

Dr. Christy Williams had made the arrangements for my time in India. As a result, I was seeing many things I would have otherwise not been privy to. Our mutual goal was that I see all of the different ways elephants live and are cared for in India, both in the wild and captivity. So far I was having an extensive exposure to both, but I never expected what I saw in Corbett.

Up at dawn, the jeeps fanned out in different directions. Most tourists wanted to see tigers; my driver and guide knew I only had eyes for elephants. Pratap Sing was a knowledgeable and enthusiastic guide; his English was fairly good. He introduced himself and confirmed that I wanted to spend my time observing elephants. A huge smile spread across his face as he instructed the driver to reverse a few hundred yards and then head in the opposite direction of the other vehicles.

The forest was impressive, with mature trees and dense vegetation. As we emerged from the forest into a sea of pasture the sight was like Jurassic Park — elephants everywhere. There were four families grazing this morning, more than 100 elephants in total. Within a couple of hours there would be little trace of them as they would retreat back into the forest during the hot midday hours. But for now they grazed contently. 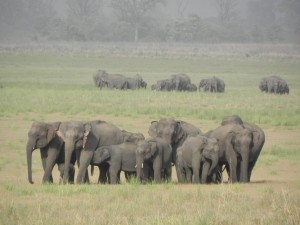 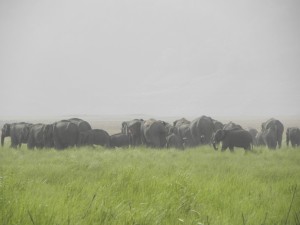 I watched as each family moved in unison, forming a tight knit group around the babies when vehicles got close. The four herds did not intermingle, although I did observe an interesting sight. Two adults and a calf broke away from their herd. The calf darted out ahead with the adults in fast pursuit. One adult stepped in front of the other, stopping her abruptly. The calf returned to her mother. They all changed directions but then the mother and calf spun around in the opposite direction again and started running. Again the other cow cut them off. This went on for almost fifteen minutes; all three maneuvering back and forth across the empty expanse between two herds.

At first it looked like the calf was trying to run 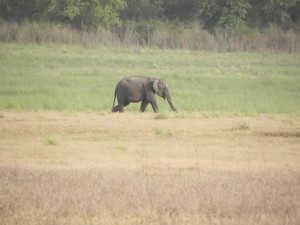 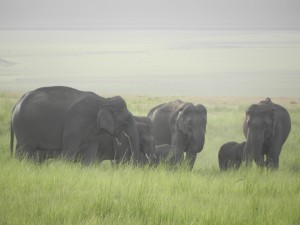 other herd, followed by vocalizations and many trunk embraces. Apparently they were related.

Amazingly, there appeared to be an equal number of calves to adults in all four families. With the exception of the one mother and calf and a tusker, the herds did not mix. 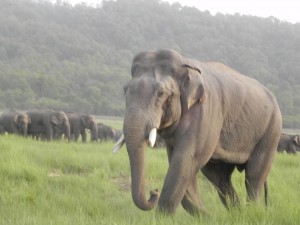 A magnificent bull casually meandered across the grasslands, fusing with each herd calmly and methodically. The females showed awareness of his approach, but not the calves — they were deep in play. The adult females would halt their feeding activity and stand still silently. As the tusker approached, they would gracefully turn from him and, in most cases, take a step or two in the opposite direction. None ran but neither did they approach him. The majority of females displayed a bit of tension upon the male’s approach and seemed to relax after he left.

The tusker calmly approached a few females, scented them and, after remaining for a few minutes, moved on to another area, another herd. He was in full-blown musth. Anyone in the grassland area with a decent sense of smell, could detect his presence. His pungent odor wafted across the vast area, carried by the gentle breeze.

The mesmerizing scene lowered my heart rate and sharpened my senses. I took in the panoramic vision of nature’s finest. I spent hours just breathing in the live image of elephant family activity. Each family had several young calves. All were nonstop activity. The sight of so many young elephants intermingled with aunts, mothers, sisters and young brothers was touching. Although I wished he had been able to grasp the gift that stood directly in front of him, even the impatient fidgeting of my bored young driver was easy to dismiss. 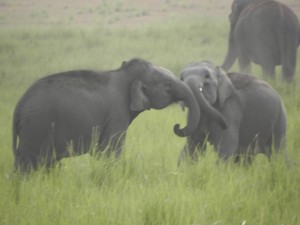 The calves raced around the others, pushing head to head with entangled trunks draped over each others face. The male calves appeared to be more physically assertive but the females held their ground most of the time. Whenever the ele-play involved two young males the action would accelerate.

Mock breeding and competitive pushing matches dominated the interaction. One young male, determined to demonstrate his superior strength, pushed his playmate down to the ground, all in play. 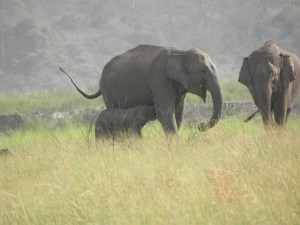 The other male took full advantage of the opportunity to tumble to the ground, roll around in the tall grass and toss his legs into the air in glee. These calves played nonstop, with the exception of a periodic pit stop when they refueled from mom or an auntie.

It is amazing to watch a calf interact with their family; everyone is a babysitter. Young siblings engage in the roughhousing, obviously refraining from using their full strength on the little ones. The young sisters and female cousins are particularly gentle with the calves.

As the herds relax, they spread out along the horizon. It is only when the calves call out and run to their mothers that the group protectively closes up like a clam shell, calves hidden in the center.

I was fortunate to observe these elephant families for two full days and a third morning. They were strikingly healthy. One herd, the dominant herd, could be identified because each member was just a little overweight! Christy explained that the dominant herd controls the best feeding areas and, as a result, gain more weight.

Knowing that our financial support in a small way has helped these elephants remain free and safe brings me great joy. To watch the families interacting, living the life meant for them, I could not help but wish this for all of India’s elephants. Safe freedom…it is possible. Protection of wildlife and the habitats they require to survive should be a priority, not only for India but for the every country.