I am back in Nepal. So much has happened during my first month here!

I accepted a kind offer from the National Trust for Nature Conservation’s Biodiversity Conservation Center to live on-grounds. It was a good decision. There is always something interesting going on, local and foreign students visiting and opportunities to learn about the work of the many conservationists on NTNC-BCC’s staff.

We have already trimmed feet at the two government centers, NTNC and some private stables, but foot trimming has taken a back seat to other projects for now.

Expanding the chain-free corral in a big way

When I arrived, the first order of business was identifying a location for an additional chain-free corral at NTNC-BCC for Man Kali and her new calf.  After I described my long-term aspirations for NTNC’s elephants, senior staff suggested that we petition to expand our chain-free corral pilot project to include the entire hattisar (elephant compound). I was deliriously happy with the idea that we might be given permission to convert the entire hattisar all at once.

Chitwan National Park’s chief warden and senior veterinarian, the Department of National Parks and Wildlife Conservation’s ecologist and NTNC’s officer-in-charge explored the idea and unanimously endorsed it. The project is scheduled to begin December 15th.

The funds to build the expanded corral were donated by EAI’s dedicated supporters including a most generous and timely donation from the Harrison Sanford Jackson estate. This donation has come at the perfect time for EAI to make a serious impact on elephant welfare in Nepal with this chain-free hattisar, the first of its kind in the country. Not only does the chain-free corral expansion mean that all six NTNC-BCC hattisar elephants will never again be shackled, the design enables them to socialize with each other.

Knowing the importance of the mother and calf bond, you can imagine how excited I was when Dr. Gairhe, Chitwan National Park’s senior government veterinarian, suggested that the family group at NTNC be allowed to live together in the same corral.

Even though Prakriti Kali and her mother both live in the same hattisar, they have not been allowed to socialize for four years, since Prakriti Kali was formally trained. This practice of separation is traditional, meant to break the mother/calf bond.

But onlookers can see that the bond between Prakriti Kali and her mother is still strong. On occasion when they are relatively close, Prakriti Kali rumbles, her mom responds and Prakriti Kali instantly assumes a posture that the mahouts refer to as “four feet together”: an awkward, stereotypical posture she exhibits when she appears to be soliciting comfort.

Dr. Gaihre’s recommendation and the blessing of PasPat, the mahout supervisor, means that Prakriti Kati will be reunited with her biological mother after four years of separation. She will also meet her baby brother Hem Gaj, for the very first time. Together the three will share a chain-free space designed specifically for them.

Anyone who has witnessed the reunion of Shirley and Jenny in the award-winning documentary “The Urban Elephant” can imagine what this reunion will look and sound like. Elephant reunions–there is nothing more moving.

Watch this short video on EAI’s work and hear from Prakriti Kali’s (aka Sweetie Kali) mahout about the difference a chain-free corral has made in her life: 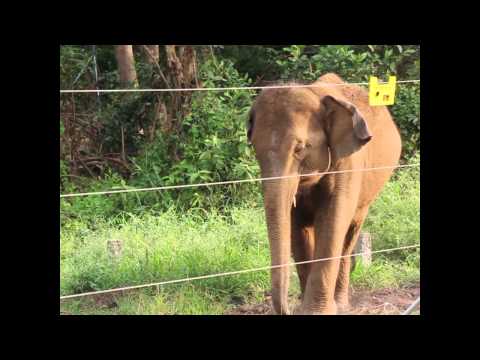 A life lost to herpes

Shortly after I arrived in Nepal, a two-year-old calf at the Government Breeding Center succumbed to the herpes virus. This insidious disease is relatively new to Nepal but has claimed the lives of many captive-born elephants in the US, where extensive research is being conducted.

The loss of any elephant is heart wrenching, but to lose a baby is particularly difficult. The mahouts were quite obviously grief stricken as they gathered in near-silence to bury one of the youngest members of their family. Incense was burned and prayers given as the mahouts dropped flowers into her grave. One of the young veterinarians in attendance said that the mahouts view the elephant as having personhood status. To them, losing this calf was the same as losing a family member.

Since herpes is a virus, there is no vaccination to guard against it. It appears and kills quickly, usually within days of the first signs (lethargy and dark spots on the tongue). The medication prescribed to help combat the disease has had mixed results and, as I found out, is not available in Nepal. Thankfully, our friends at Wildlife SOS-India came to our rescue.  Dr. Yaduraj spent days locating the volume of drug required. After three shippers refused to ship to Nepal, he found one who was willing. There was one last delay—when the package was returned to Wildlife-SOS for additional address information—then it was finally sent on its way. Our sincerest thanks go to Dr. Yaduraj for his assistance purchasing and shipping the medication to us.

Getting accurate weights in case All babies and their mothers at the breeding center were weighed. If any of the babies become ill, Dr. Gaihre will be able to prescribe an accurate dose of medicine.

If treatment is needed, the veterinarian must know the patient’s weight in order to prescribe the accurate dose of medication. It was decided that all the elephants should be weighed in the event another baby is stricken with the virus. There is a scale on-grounds but the elephants needed to be trained to step onto the platform.  They all did great but the calves were especially fabulous. They all took their turn to step onto the platform. None showed a bit of fear; each of them walked confidently across the platform to receive a tasty treat.

As an added precautionary measure, the babies were also trained for tongue examinations, a simple and painless procedure to detect the disease in its early stages.

The babies were willing participants in the Compassionate Elephant Care training method, which uses only positive reinforcement. Within three days all the calves were happily laying their trunk back across their forehead and sticking out their tongue for their reward: a juicy orange slice. With the trunk and tongue in this position mahouts can easily examine the calf’s tongue for abnormalities. EAI paid for a shipment of medication used to combat herpes and worked with mahouts to show them how to train the babies for tongue examinations.

The mahouts are now checking the babies’ tongues twice a day–once in the morning before going to the forest and then again in the evening when they return. Hopefully the virus will not strike again but, if it does, the mahouts’ vigilance could make all the difference.

Efforts to move Mali from her solitary existence in a zoo in the Philippines to a sanctuary in Thailand continue. An op ed by Carol comparing Mali’s life to that of Tina, who came to live at The Elephant Sanctuary, appeared this summer in a paper in the Philippines.  Since then, Carol’s op ed has also appeared in Sri Lanka’s Sunday Times  and, most recently, the Bangkok Post.

And now we are three

EAI will soon celebrate its third anniversary. It’s hard to believe we have come so far and accomplished so much in such a short period of time.

We have been able to do so much – and have such an impact – because you share our dream and continue to support the important work we do. With so many needy elephants in situations that, at times, are overwhelming, it is essential to know that you are backing our efforts to make life better for captive-held elephants in Asia.

It doesn’t matter if we are building chain-free corrals, teaching mahouts to handle their elephants in a gentler manner, providing pedicures to any elephant in need or stockpiling medicine to treat baby elephants infected with the herpes virus, you are always there to make sure that we are able to provide swift and humane assistance, one elephant at a time.

We cannot do it without you. At a time when elephants are fighting for their very existence across Asia and Africa, you help EAI make a real difference. I know you will remember these hardworking and many times neglected elephants in your year-end giving.

2013 promises to be another year of challenges and change for the better. I look forward to continuing our work together.