Elephants I have known | Mahouts | Training

Down by the River

This morning I followed the elephants down to the river for their morning bath. The sheer joy of immersing in water is universal with elephants. It gave me goose bumps to see them so relaxed, splashing water, throwing trunkfuls over their backs and drinking freely.

When I am standing, quietly observing the Sauraha elephants, I can’t help but notice similarities between this group of elephants and my girls. There is one who is Sissy’s twin in looks and temperament and another that is a younger version of Billie-Sue. This elephant caught my eye the first day I met her, not only because she looked so much like Billie-Sue but also because she seems very insecure, much like Billie-Sue when she was first rescued. 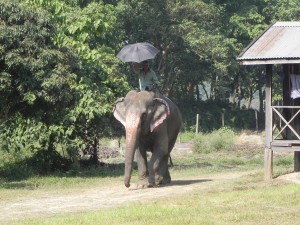 My most memorable time this morning was when one of the elephants “accidentally” dumped her handler into the water. I of course was silently cheering for the elephant as the young man tried to maneuver in the shallow water to remount his elephant.

The elephant took full advantage of her temporary freedom, turning her hind end to the boy each time he got close. I don’t know exactly what he was saying but he was not happy that the elephant was not responding. His commands got louder and louder, his embarrassment at her outsmarting him was obvious.

Ignoring his attempts to control her, the elephant continued to cover herself with trunkfuls of the cool river water, until another man appeared. He yelled a few commands to the elephant and climbed onto her back while she was still in the river. She continued to play, trying to ignore him as well but it was obvious that she respected him more than the boy.

The phanit was aware of being watched and thankfully did not physically punish the elephant. Instead he made her go through a series of repetitive commands like turning from side to side and lying down in the water. She was not willing to give it over right away and did a “Minnie stunt,” dropping her head to the river bottom with her rear and one hind leg sticking up in the air.

The handler was obviously her phanit. Although she was making it difficult to stay on top of her back, he succeeded. He actually laughed, which relieved my concern that she had gone too far and would pay for her disobedience. I exhaled, realizing only then that I had been holding my breath.

The pachuwa stood looking dejected on the river bank. No doubt he had just learned some valuable training lessons and, hopefully, a deeper respect for the intelligence of his elephant. 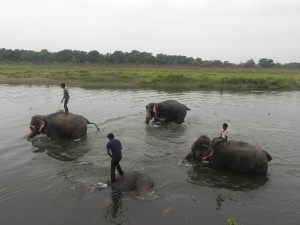 A young pachuwa fell off his elephant

The reality is that no matter the amount of academic training a person has, practical experience is essential in order to develop an expertise with elephants. The number of different elephants and situations a handler is exposed to is key to developing skills. Each lesson an elephant teaches the handler is a building block for the next lesson in the unending series of lessons that brings valuable insight into who elephants are.

I am doing my best to understand, without judgment, the traditions held in Sauraha regarding elephants and handlers. The more I learn about the traditions, the better prepared I will be to effect some degree of change. The elephant owners and handlers are receptive, which gives me cause to be optimistic. Change can occur, it will just take time.