Each Government Forest Camp and Wilderness Sanctuary is Different

Today’s health camp was held at Pabitora, a wilderness sanctuary where nine elephants reside. National parks and wilderness sanctuaries are government-run and hold different classifications, with national parks holding a higher ranking. In both cases the animals are protected and tourism is not aggressively commercially marketed .

At 16 square kilometers, Pabitora is considered small but it protects the largest concentration of Indian rhino in the world. Their renowned breeding success is enhanced thanks to the cooperation of the local people; poaching is not a problem. The landscape is unbelievably beautiful with a year-round clean river running through it; by all accounts Pabitora is an Eden.

The elephants were beginning to gather when we arrived. Some had just finished their morning bath while others where just taking the plunge. Bishwajit stuck close to his mother as she carefully maneuvered the river bank entering the shallows. At four months of age Bishwajit is already an expert swimmer, resembling a 500-pound bobbing cork.

Phulmati is an experienced mother, calm and confident. She never lost sight of her lively calf as she gracefully waded around him. When she lowered herself in the shallows to allow her Phandis (lead mahout) to scrub her skin with a fistful of vegetation, little Bishwajit took full advantage. His comical play included climbing on his ever-patient mother’s face and over her head, concluding with a belly flop off the other side. In between submarine dives Bishwajit would surface and extend his tiny trunk, making contact with his mother’s face every thirty seconds or so.

Bohagi, Phulmati’s first calf, is already five years old and recently completed her formal training. I looked closely to see if I could find the scars I was confident she would be wearing as result of the training process but to my surprise there were none.

By the time Bishwajit and his mother emerged from the river, the camp was well underway. The males here outnumbered the females six to three. Two of the males, Naga and Rudra, were recently moved to the sanctuary from the Guwahati Zoo. Even though, in theory, the move is in their best interest as now they live in a natural habitat with access to clean water and live vegetation, their initial introduction was problematic. Bikaram, the sanctuary’s resident mature male was not impressed with the new arrivals and was extremely aggressive toward them. Determining if and how captive males should be introduced to semi-wild environments already occupied by mature males is a subject that will need to be studied to ensure the welfare of all concerned.

Each elephant has a Phandis, their trainer and caregiver, who attends to their needs, takes them on anti-poaching patrols and ensures they spend many hours each day in prime grazing and foraging habitat. I know we would love to think of these elephants as being free to wander at will and do as they please but that is not possible. The parks are not fenced and human settlements encircle the national parks and wildlife sanctuaries. In the recent past some captive elephants have been released into the wild only to pay a horrific price when they wandered outside the boundaries of their protection and become a pest to the locals. Of the options, including illegal logging, tourist safaris and unemployment, which can be disastrous for their welfare, it would appear that these elephants are in the best situation currently available to them.

Consistent with Dr. Sarma’s other camps, the elephants received a thorough physical examination, inoculations, fecal exams and deworming when needed. A large abscess on Phulmati’s back right leg was the biggest issue of the day.  Unfortunately for Phulmati, some time back a veterinarian had administered a high volume of drug at a single injection site, resulting in an infection. Dr. Sarma had been called in to address the problem and was pleased at the condition of the wound since his last visit. While dressing the wound he remarked that it was healing nicely.

Bishwajit was full of himself, desperate for someone to play with. He figure-eighted under his mom’s belly and around her legs as she patiently accepted her abscess treatment. Cleaning out the wound and placing new dressing inside took about 15 minutes, during which time the ever-active calf made a nuisance of himself. At his tender age he knows no authority except his mother, thank goodness for that. And in the case of his mom, like most experienced elephant moms, Bishwajit could do no wrong. When he found that the humans would not engage in elephant games he targeted a nearby dog, promptly chasing it off.

During the camp, all the elephants, Phandis and mahouts mingled around the site. Only after all the elephants had completed a physical examination and treatment did the exit process begin. A seemingly discarded piece of burlap was silently grasped and effortlessly flung by an elephant over her head to the waiting Phandis. Serving as a seat cushion of sorts, the rider placed the burlap just behind the elephant’s shoulder blades. He settled comfortably on the burlap, draped his legs behind her ears and tucked his feet on the inside of the neck rope.  Each Phandis signaled to his elephant in foot-language and the elephants responded. In a synchronized dance they fanned out in different directions, all leading to the same place, the forest.

Now the elephants will spend hours grazing and foraging and later in the day they will patrol their home. Protecting the endangered rhinos is their job. Considering the alternatives for elephants living in captivity in Asia, theirs is a relatively good life. 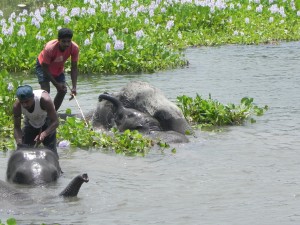