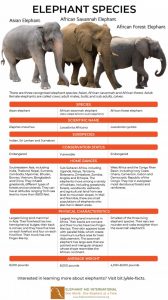 Physical Characteristics: Largest living land mammal in Asia. Their forehead has two hemispherical bulges; their back is convex; and they have five toes on each forefoot and four on each hind foot. Their trunk has one finger-like tip.

Home ranges: Sub-Saharan Africa, including Uganda, Kenya, Tanzania, Botswana, Zimbabwe, Zambia, Angola and Ethiopia. The elephants move among a variety of habitats, including grasslands, forests, woodlands, wetlands and agricultural land from sea level to mountain slopes. In Mali and Namibia, there are small populations of elephants who also live in desert areas.

Physical Characteristics: Largest living land mammal in Africa. Their backs are concave and their trunks have two finger-like tips. Their skin appears loose with parallel folds, which create maximum surface area for heat disbursement. The savannah elephant has large ears that are pointed and triangular shaped whose shape resembles the African continent.

Physical Characteristics: Smallest of the three living elephant species. Their ears are rounder and tusks straighter than the savannah elephant’s.