That was Prakriti Kali, the first elephant in Nepal to be released from chains.

Six months later, five more elephants were released from a lifetime in chains.

Mel Kali was the record holder in the herd, having lived in chains for nearly 70 years.

On April 6th, at 4:30pm, Nepal made history again when all five resident elephants at the government’s Kasara hattisar went chain free!

Six-year-olds Tamor Kali and Himal Gaj were the first to be given their freedom. 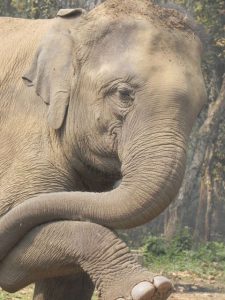 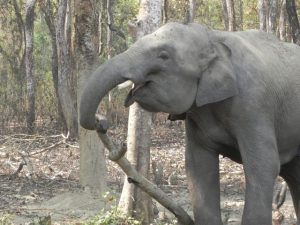 They wasted no time, finding the best scratching trees and dusting bowl.

Then, a few days later, after all six chain free corrals were completed, Prayan Kali, Laxmi Kali and Khosi Kali dropped the chains of tradition and went free as well. 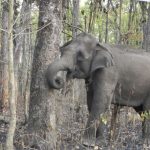 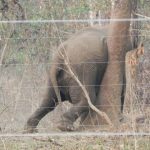 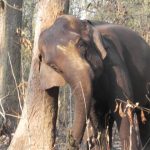 Watching the elephants shed their chains and adapt to the change so effortlessly is breathtaking.

Young and old alike seem instinctively to know what is happening.

In synchronized movement, they revel in a scratching and dusting ritual. Nearly becoming one with the trees, they exfoliate every inch of their robust body. Even the tender skin behind their ears and under their massive legs get the invigorating treatment.

After the exfoliation is complete they follow up with a full-body dusting. In the most graceful slow motion, they fling trunkfuls of dirt under their bellies, on their backs and everywhere in between. This natural spa experience is essential for maintaining healthy skin.

Chained elephants are denied this opportunity.

For one minute become an elephant. Close your eyes and step inside their skin. Feel the frustration when denied access to trees for scratching and clean dirt for dusting. Now feel the sensation of scratching every tick bite and itch spot until completely satisfied.

The five elephants in Kasara hattisar are just the beginning. When our project is complete, 63 elephants will enter the ranks of the chain-free.

A huge thank-you goes to Kamal Kunwar, chief conservation officer of Chitwan National Park, the hattisar staff and, of course, all who believe in and support this project.