Today’s foot trimming adventure was over the top, a marathon day with Dr. Gairhe—the senior government veterinarian—leading the way.

Kiran and Chitran, the two vet tech/3rd year foot trimming students, and I fit perfectly in the back seat of the full-size pickup truck…or so I thought when we all piled in. If it had not been for the road conditions, the ride would have been…well, let’s say, less memorable. I’m not complaining — far from it — and I enjoyed every minute of our 14-hour adventure.

One thing that struck me this time in Nepal is realizing my unconscious expectation of comforts that I take for granted in the US. Sitting between two large men, bouncing down a seriously bumpy road and being slammed side-to-side like bumper cars, I realized that I accepted this assignment with an unreasonable expectation of transportation comfort. The reality of the situation made me laugh.

The Nepalese don’t fret over physical discomfort, they simply accept it. So when I started joking about the guys staying on their own side of the seat, it soon became a humorous game. When Kiran would absent mindedly crowd my space, I drew an imaginary line between us and said, “You have crossed the line,” and like two adolescents we’d crack up with laughter. Soon everyone got into the game of not invading each other’s space, so when Kiran flopped his entire arm over Chitran’s leg, he was abruptly chastised—jokingly. Everyone broke out into hysterical laughter. It was refreshingly silly to experience such discomfort and be able to laugh about it together.

Humor aside, I realized that if I continued to be thrown back and forth between the football player-size shoulders on either side of me, I was going to be very sore, if not crippled by the end of the day, so I pulled rank (age, actually) and claimed the window seat. This was much better for me as I could press myself against the door and hang onto the armrest for security.

Four outposts, seven elephants and a canoe like a swimming pool

Our mission for the day was to visit four government outposts to trim the feet of seven elephants. Our first stop was Gadini outpost, a place we visited last year. After driving for nearly two hours we arrived on the bank of a beautiful river. The flimsy wooden canoe that would carry us to our destination was on the opposite side of the river. The boat man soon appeared and to my amusement proceeded to bail out the canoe—it had taken on quite a bit of water—before heading in our direction.

In order to board in peaceful waters we hiked a short distance upstream. The day was already steamy hot. Tiny frogs scattered as we approached the water’s edge, disappearing into the calm shallows.

Our canoe was waiting when we arrived and we gingerly climbed aboard. A real man, or woman for that matter, sits on the floor of the boat. But customs are changed for foreigners. The government guard post on our side of the river provided tiny wooden seats for our canoeing comfort—and to keep our backsides dry. I kind of wondered where the life jackets were, since the canoe was already taking on water through cracks in the flimsy wooden planks strapped together with giant metal staples. To add to the drama, Dr. G asked “Can you swim?” I can’t remember not knowing how to swim, and wondered the level of fear one would experience crossing this fast-moving river in a boat that resembled a swimming pool, not knowing how to swim.

With a smooth push off from a ten-foot bamboo pole, the boat master expertly guided us into the swiftly moving current. The water picked up volume and speed and within minutes we were deposited on the opposite bank without incident. We disembarked and hiked the short distance into the forest to the outpost. The forest was lush and green and teaming with active, boisterous bird life.

Namastes were exchanged and then it was right to work. Kiran requested that the crew pa (machete) be sharpened, which is effectively done on a large rock with sand. No power sharpening tools here: they use the available resources and manage just fine.

Elephants Sano Chanchal Kali and Rampyari were tethered under separate shelters bordered by the forest. The stables were clean and the girls looked on calmly.

With a simply utterance of bite (lie down), Sano Chanchal Kali slowly folded to the ground without resistance or concern. We were all so pleased to see that her pads were healthy and evenly worn and her nails were only slightly overgrown.

As I took “before” photos, put on my girly gloves and prepared my exacto blades, which are also kind of girly, the guys were already trimming excess nail with precision that is hard to imagine when using a machete. I am in awe of how well the men handle this tool, but they grow up using it, starting with cutting grass to feed livestock and later as a knife to cut anything. 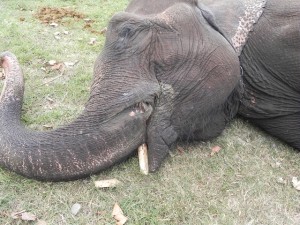 Sano Chanchal Kali took this special time of hati la na pita (don’t hit the elephant) to drop off into a fairly sound sleep for most of her trimming. She shifted to her other side without resistance and allowed us to give her one of the most beautiful pedicures to date!

Almost in an identical fashion to her sister, Rampyri folded to the ground following a simple verbal command. The mahouts have gotten the word: if you want this crew to trim feet, no hitting allowed. Refreshing for us and for the elephant. Rampyri’s feet were another pleasant surprise, pads evenly worn and supple, nails only slightly overgrown and no sign of decay or infection. The crew commented on “what easy feet” these were.

Our work in this camp was completed in record time thanks to the healthy condition of the elephants’ feet and the relationship they share with their mahouts.

Honestly, I can’t remember if we had our home cooked meal at this outpost or the next — those details seem to blur together — but I do remember that to get to the second outpost we got back into the canoe and floated downstream for some time. A black egret fished on the shoreline ahead and a white breasted Kingfisher swooped past us in pursuit of a meal. Without any initial sign of elephant or mahout life, we landed again on the riverbank and hiked a short distance to the second camp.

These camps are inside the national forest, which, in this location, is an island. Dr. G told us that wild bulls do not cross the river encircling this island. No one knows why, but as result of this phenomenon, captive bulls can be kept on the island without fear of being attacked by wild bulls.

As with Gideni, the elephants at Kurauli post were aware of our arrival. Dhirendra Kali and Gandaki Kali, were waiting—mahouts casually mounted on top—surveying the approaching team.

Before having hardly a chance to settle in, I heard “bit” followed by “raw,” which meant our first client had reclined and was awaiting her pedicure. We now operate quite smoothly as a crew. While I unpacked trimming tools, gloves and camera, the others examined the client’s feet and prepared for trimming by sharpening the machetes.

We all commented on how great Dhirendra Kali’s feet looked. I liked the pattern I was seeing. The more remote the outpost, the better condition the elephants and their feet were in, the more skilled the mahouts were and the less pressure the elephants experienced when requests were made for their compliance. But of course, they were living in their element with the river nearby, sheltered under giant trees, on natural substrate and plenty of exercise combing the forest for poachers. 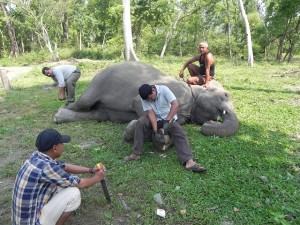 With such healthy feet, there was little work for the crew. Shave off overgrown nails a little, check for decayed areas and she was done. Another easy pedicure!

When Dhirendra Kali left the trimming area she let out a “Queenie-squeak.” It transported me back in time to the Sanctuary overlook at the Q-barn with Minnie, Lottie and Queenie playing in the mud, Queenie making her distinctive squeaks nonstop. Dhirendra Kali’s gentle sound brought back a very a pleasant memory for me. I accepted it as the gift it was.

But this was not time for daydreaming because Gandaki Kali was already in place and waiting for her pedicure. I was pleased to see that her nails and pads were also healthy and only slightly overgrown.

It is so encouraging to see that these elephants are getting sufficient exercise, on appropriate substrate, which is why their feet are so healthy.