How to Be a Responsible Ele-Tourist

These photos of captive-held elephants in Asia are not unique. I am posting them to document what happens when an elephant is struck on the head with a stick, ankus (elephant hook), axe or other weapon. They illustrate how these elephants suffer for the tourist industry. 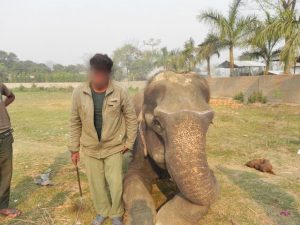 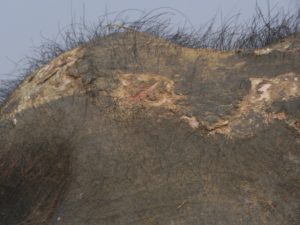 The practice of hitting an elephant on the head with force is traditional across Asia. Abusive dominance is believed to be the only way to control an elephant. It is the form of dominance and punishment taught to and expected of mahouts (handlers).

It’s easy to blame the mahout but, if we do, that blame is misplaced. Mahouts are poorly educated and paid, low-status workers. According to the cast system, if they want to work , they do what they are told, without question.

It might be hard for us as westerners to comprehend such blind obedience but in many Asian countries, it is expected of low-status citizens.

Rather than blaming the mahout we should look hard and long at those who control the mahouts — elephant owners and supervisors — and those who finance the system, tourists.

Yes, tourists are key. Tourists pay to get close and interact with elephants. In many cases, unscrupulous supervisors and owners force mahouts to allow the dangerous interactions tourists want, making the mahout responsible for their safety.

I have witnessed many examples of young children of higher social standing demand that a mahout allow them to interact with his elephant in a dangerous manner. The mahout and his elephant are required to oblige their whims. These privileged adolescents will even strike the elephant and mahout with a weapon to demonstrate their position of power.

The mahout is required to keep his elephant under control at all times. When an elephant does not respond quickly to a command, the mahout is, by training, required to strike him/her forcibly with a weapon across the bony surface of the forehead.

Hitting an elephants’ skull with force causes a thunderous noise and vibration inside the head, as well as physical pain.

Repeated hitting causes tissue damage. After several harsh blows, the tissue is irreversibly damaged. It abscesses, dies, rots away, scabs over and then sloughs off, leaving a light colored scar.

An elephant’s physical response to injury is no different from that of humans’. The process from injury to scar takes weeks, during which time the elephant is suffering painfully.

No research has been conducted to evaluate the damage done to an elephants’ brain by beatings and subsequent infection. It is known, however, that mammals can contract encephalitis from a brain infection.

What you can do

When you travel in Asia you’ll see that most elephants used in the tourist industry have wounds and scars from being beaten. The abuse is driven by tourists’ desire to interact with elephants, requiring mahouts to use force to control their elephants during the interactions.

Here are three ways you can reduce the suffering of captive-held elephants and contribute to change:

• Eliminate elephant rides, bathing, painting, entertaining, selfies and hand feeding from your bucket list. If you refrain from direct contact with an elephant, the handler has no need to abuse his elephant to accommodate and protect you.

• Educate friends and family who plan to visit Asia about the how elephants are used in the tourist industry.

• Support only organizations that offer ele-friendly programs. Ele-friendly programs prohibit direct physical contact between tourists and elephants. Instead, they allow you to observe the elephants from a safe distance as they go about their daily routine.

If you or someone you know is preparing for a trip to Asia, there are a few organizations that provide ele-friendly programs: in India, Wildlife SOS India; in Thailand, Boon Lott’s Elephant Sanctuary and The Mahouts Elephant Foundation; and in Nepal, Tiger Tops and the Association Moey.

An informed tourist is a responsible tourist.