Elephants I have known | Elephants in the U.S. | Sanctuaries

Recently, a friend emailed me a question: “During the filming of “The Urban Elephant” documentary, what was going on in your mind (and heart) when Shirley and Jenny were trying to get close to each other?”

I realize many of you may be curious as well, so I decide to share with all of you.

“The Urban Elephant” film crew had been at the Sanctuary all day and had just left for dinner when Jenny approached the barn. She and Shirley had not yet met.

When Jenny first stepped inside the barn she was calm, but when she saw Shirley she became agitated. She reached through the stall toward Shirley, intensely focused on her. Shirley showed little interest but finally responded to Jenny’s attention by stepping close enough to be touched.

Jenny’s agitation grew. She extended her trunk all the way through the bars, reaching out, touching, talking to Shirley. Shirley stood parallel to the corral allowing Jenny to touch all over her, but continued to show very little interest. Jenny began to work herself up into frenzy, very uncharacteristic behavior for her.

Scott and I were sitting inside the barn only a few feet away, watching. I was filming.

Jenny was animated and anxious; she wanted to get closer to Shirley. Shirley remained calm. But when Jenny placed her truck up to Shirley’s mouth, Shirley froze. Her posture changed, she became a little rigid and then turned to look at Jenny. She reached over to touch Jenny’s mouth and what followed was undefinably powerful and life changing for all present.

Looking straight into Jenny’s eyes, Shirley erupted into a huge baritone roar. Caught completely off guard, I thought a bomb and an earthquake had simultaneously hit the barn. Her bellows ignited Jenny’s bellows, which together literally shook the barn.

With her head held high and mouth gaping open, Shirley roared and gently touched all over Jenny’s smiling face. Jenny’s body immediately relaxed as she continued to grope and pull at Shirley through the bars and bellow. The volume of their shared roars was deafening. 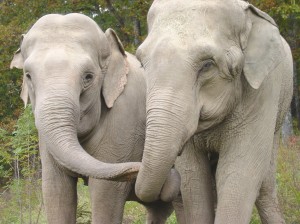 The energy in the barn was so intense I had to step outside the door to catch my breath. Seriously, I could not breathe. I did not yet fully understand what was happening. I had only seen such a display of emotion once before when a baby elephant at a breeding facility was separated from his mother for the first time. The two nearly killed themselves trying to climb over the corral to get back together. Their roars were one and the same with Jenny and Shirley’s.

This memory flashed though my mind and within seconds I understood. Jenny and Shirley had known each other before and during that time had forged an intensely close relationship. This was a reunion.

The powerfully joyful vocalizations continued for some time, with Jenny and Shirley groping each other all over. I cannot convey how thick the love was in the air. I was too caught up in the emotional exchange to register just how long this went on but it could have lasted close to 30 minutes.

By the time the volume of their reunion subsided, Shirley was emitting short, sweet sighs and Jenny had melted into the steel bars that separated them, their trunks draped across each other faces.

I knew I had just witnessed a miracle, the first of many that I would be privileged to witness in the years to come.