Jon was well rested for his morning training session. Clearly he had thought about what he wanted to accomplish today. The mahouts sat a short distance from the corral in intense silence. They are all very young and, contrary to my initial concern, are quite open to this new training and me, a foreign woman, instructing them and their elephants. 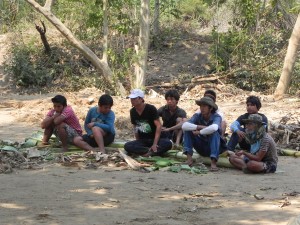 Jon has figured out that hanging both front legs over the corral no longer gets a reward as it did in the first two sessions. He knows that the reward comes when one or both front feet are on the lower rungs of the corral. What a quick learner he is. The sparkle in his eyes is contagious; he finds much entertainment in the training game.

After the session, Jon’s mahout took him for the ultimate reward: a swim in the river. The swift moving water is deep and refreshing from the looks of his antics. He spent more time under the surface than atop. 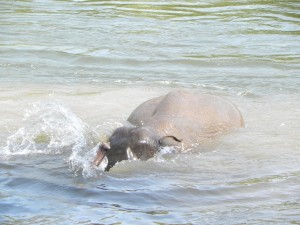 I mistakenly assumed that Jon was never allowed in the river without a long drag chain attached to his ankle. But I learned that the tether was for the safety of the tourists. This morning there were no tourists so Jon was rewarded with extra freedom. He had a blast, completely unencumbered. Imagine how fabulous the freedom felt!

Of course, every young boy has to test his limits and Jon is no different, so when he swam to the edge of the wooded observation deck and started to test his strength by pushing on it with his head, Piza, his twenty-one-year-old mahout told him to leave it alone. If we could hear the lower frequency used by elephants to communicate much of their thoughts and emotions, I am sure we would have heard Jon squeal in glee as he flung his body into the shallows causing a tidal wave when his huge head smacked the surface of the water and disappeared underneath. 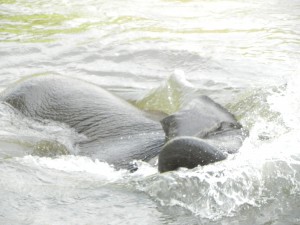 Jon played this way alone and unencumbered for several minutes, then emerged without hesitation at the invitation of his mahout, who cleverly presented a freshly cut stock of bananas.