Today I traveled many kilometers through Chitwan National Park to reach my foot trimming clients. To get there, I hiked to the river’s edge, boarded a small sailing vessel, crossed a river and drove through a magnificent forest, crossing over creeks on what I would call barely-bridges (as opposed to sturdy concrete ones). It was a wonderful adventure!

When I reached the river, the tourists were packed like sardines in their low-rider boats with a boatman steering them lazily down river. Dr. Geare, the head Government veterinarian at Chitwan National Park, Chitra, a vet tech who works with Dr. Geare, and I were ushered onto our private dugout canoe with removable seats (little wooden stools that fold up against the side of the canoe when not in use), which silently glided across the river to the sand bank on the opposite side.

Our driver magically appeared. We climbed into a truck and I must say had a ride of my life. It was only after we picked up several young soldiers hoofing it back to camp that I was able to release my firm grip on the door frame, the only thing keeping me from bouncing out of my seat and hitting head on the roof. The weight of the men in the back gave the truck better traction and kept the back end from bouncing up and down like a trampoline. It was a great ride through a beautiful forest.

Within minutes a wild boar had crossed the road, male peacocks could be seen and heard sounding their calls, a monkey clung to the side of a tree, a couple of deer flashed by and too many muggers (crocs) sunned themselves along the back of a small creek.

Our destination was the Kasara forest camp where four government elephants live. What a shift from Sauraha. Don’t get me wrong — Sauraha is a nice place for the government elephants — but in Kasara the elephants are really living in the forest. If I could only get rid of the chains and hobbles and put up some hot wire fencing, I would really feel as if I was helping them. Okay, one thing at a time — first feet trimming and then more freedom!

Kiran was not with us today, but Chitra also excels at foot trimming. Upon arrival, I found that instead of the three elephants I was expecting there were actually four. Three elephants were scheduled for foot trims which is why they made it on the list, or maybe it was because the fourth elephant actually is unnamed. She is Laxmi Kali’s year-old calf. When I asked her name, a slight hesitation was followed by, “Her name is Laxmi’s calf.”

After spending several days trimming the feet of privately owned elephants, I must admit that today really highlighted the differences from those owned by the government. The government mahouts seem to have a much better relationship with their elephants. They do not yell incessantly nor strike their elephants absentmindedly, which is good because Chitra and Dr. Geare had already heard my request for no pit neu. Actually, my request has grown more sophisticated following an impromptu Nepalese lesson I had last night. I was told that no pit neu is nonsensical and that the proper way to get my point across in proper Nepalese is hati lie na pita, which translated means, “Do not hit the elephant.”

The foot trimming went smoothly, with the mahouts seeing for the first time how to administer proper foot care. They were very interested and helpful, and each appeared proud when his elephant’s trimming was completed.

Just as we were finishing up with Laxmi Kali, her calf decided that it was time for a drink and let out a boisterous “I’m thirsty!” yell. Mom immediately threw her hind leg in the air to get up, a fair warning to the mahouts that she really needed to respond to her calf. We all laughed, knowing how the babies call the shots. Laxmi jumped to her feet and baby got the drink she was so thirsting for. 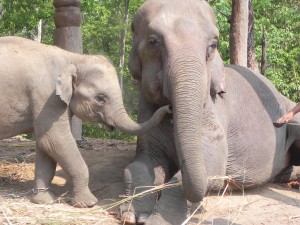