Khan Kluay shows a softer side

I thought about renting a car on my next trip to Thailand but realized that would be silly because even though I would have convenient transportation at my finger tips, I would get lost everywhere I drove.

Navigating today’s trip from Phetchaburi to Wildlife Friends Foundation Thailand (WFFT) would have been quite stressful without a local person at the wheel. Street signs are not in English and asking for directions results in a blank stare followed by a toothy grin. So for now I will be satisfied with public transportation and the gracious offering of transport from facilities like WFFT. It is much appreciated.

This afternoon I arrived at WFFT and was pleasantly surprised to see that all five elephants live chain-free. Their pipe and cable corrals are a time-tested fencing design. The electric fence attached on the inside of the corral as a secondary security measure is also time-tested, and a requirement with young Khan Kluay. 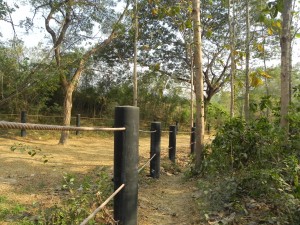 One of the most beautiful elephants I have seen, Khan Kluay — Bam, as his mahouts call him — is nearly six years old and recently started acting out aggressively. After a mahout was injured the wise decision was made by the foreign management to go protected contact. Since the elephants live chain-free, the change does not affect Bam in a negative way. It may make the mahout’s job a bit more challenging because he must gain Bam’s cooperation, but for Bam, it’s all good. 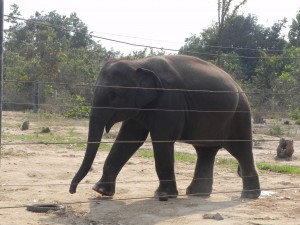 My observation is that Bam is insecure and hides behind a mask of spurts of aggression. He lives with 40-year-old Som Boon; they appear to enjoy each others company. She is gorgeous with flowing polka-dotted ears and a well-rounded figure. An old injury to her back left leg has left her with a limp but she is agile and active – a very lovely lady. 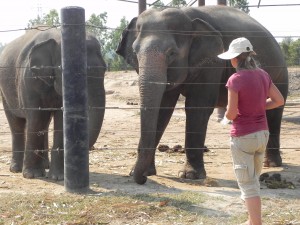 After a brief tour of the facilities and elephants, we returned to Bam’s yard to watch his behavior around the mahouts, who were preparing his evening feed. He shadowed the mahouts as they walked the fence line, threw dirt in their direction and mock charged them. The mahouts did not react so the display of aggression was short lived. Without difficulty, a mahout shifted both Bam and Som Boon into an adjacent holding area so that volunteers could clean the yard and put fresh food and treats out for the elephants.

Lucy and Tom, two of WFFT’s permanent staff, helped me quickly manufacture a target pole out of a scrap piece of plastic pipe, a portion of a burlap bag (for the soft end), a length of elastic and a bit of surgical tape. This ingenious effort resulted in a functional target that would serve Bam well. 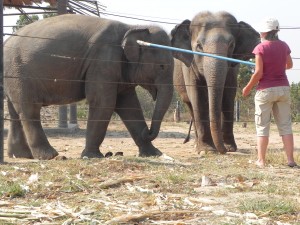 When I started working with Bam it was immediately apparent to me that he was a bit of a bully toward the mahouts but deep inside he is a frightened boy. He shied away from the target as I ever so slowly slid it over the cable into the corral. He inched forward, wanting desperately to get near the bright blue pole, wiggled his head back and forth, wanting to touch it and fearing it at the same time. He danced around the target like a prizefighter, but at no time did he show any aggression. 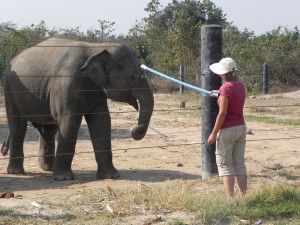 That was all it took. He soon was touching the target with his forehead fearlessly. Yes, he had a grin on his face and a sparkle in his eyes. He offered and I captured parts of his body – “sapoke” (hip) and “kalang” (back leg) – and when the fifteen-minute session ended, he was playing with the idea of presenting his “who” (ear). I am ecstatic over his participation. He relaxed right into the game, something I was not sure would happen, having been forewarned about his behavior.

Once again, positive reinforcement target training proves to be a positive way to engage with elephants, even ones who display aggressive behavior. It warms my heart to see Bam playfully engaged in the game, a tool that the mahouts can use to build and strengthen their relationship with him.

Much appreciation goes to WFFT’s  founder Erwin Wiek and his dedicated staff for hosting my visit. The center is a model for others striving to create a safe and healthy environment for captive-held elephants in Thailand.