Sitting in the passenger seat of the bright orange son tough (vehicle), the solo passenger bouncing down the dusty road, I left Elephant’s World. The tornado of emotion swirling inside made me dizzy, happy, sad, thankful, torn, already longing for the family I am leaving behind.

The last three days have been trying. Jon is in detention. He is fighting against the restraints of control being put upon him. Being as respectful as possible, I have made every effort to find common ground with management and the mahouts in order to ensure that Jon receive proper care during this critical time. They are not beating him, nor being overtly cruel, but they are punishing him by tightening the reins of control and reducing his freedom. They are mirroring their forefathers, who taught that disobedience results in punishment, which in this case requires deprivation.

Today was especially hard because I knew I was leaving. I felt I had failed Jon and the mahouts, and struggled for inspiration. I spent time observing the elephants in the morning. We were alone — the mahouts had gone to collect fodder and there were no tourists on grounds. I found myself melting into the elephants’ rhythm. It took no effort to feel their boredom, their thirst and their hunger. Their resignation hung heavy in the air.

In a near meditative state I found myself thinking about the mahouts and their families, living in their simple bamboo huts. Laundry hanging on bamboo rods to dry in the open air. Breathtakingly colorful violets draped from the rickety porch shaded by scraps of shade cloth. I thought about this for a long time. I tried to feel how it would feel to live here, to be here, to know nothing else. Would I yearn for something different? Do they yearn for something else? Or are they content, surrounded by their families and friends and their elephants?

Drawn back to the massive gods chained in front of me, I wondered if my need to help them resulted from an unrealistic personal projection, or could it be that they too recognize the lack of freedom of choice they live with day after day. The peaceful river flowed nearly silent on one side of me, while tethered elephants simply existed on the other. On the river side, life is abundant, rich with texture and color, teaming with bugs, darting birds, the swirling current and the wind. On the other side, a colorless one-dimensional backdrop of dust covered half dead trees rooted in a barren carpet of dehydrated earth devoid of vegetation did nothing to enhance the elephants, who were deep in the escape they have mastered, nearly void of life from being left on chains for nearly every hour of every day. They don’t even sway — they just breathe, hardly existing.

Being kept on chains creates a disconnect that cuts an elephant off from the natural world and, as result, their own nature. They look so out of place. Watching them, I’m sure the elephants know the difference between here and their real home, and they realize that the choice is not theirs. Some rebel, some accept and others go insane. I wonder if the mahouts ever feel this way.

Piza knew I was sad about leaving with Jon still incarcerated. Over the past three days, I asked about Jon’s food, water and chain-free time at every opportunity. Piza was always polite and kind and explained the current plan as best he could.

I had delayed my departure to the very last moment so I could see the elephants in the river one last time. I heard a familiar playful voice call out to Jon and spun around in its direction. I couldn’t believe it — Jon was running full speed ahead, hobbled, with drag chain trailing behind, making a beeline for the river and the other elephants. He was a whirlwind of energy, like a tornado, spinning rapidly while steadily moving forward. Piza had intentionally released Jon for the river, standing a few feet behind, wearing that “I love Jon, too” grin that stretches across his entire face. 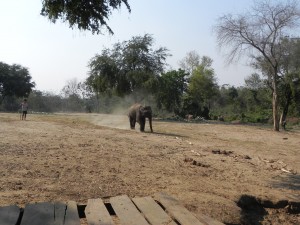 I was overjoyed. What a sight Jon was, running FAST, glancing back at Piza every few seconds to make sure he was not being followed too closely. He was ready for this mad dash to the river; he had waited all day for it. My heart burst seeing the look on Jon’s face: he was ecstatic, about to explode with excitement. He did not slow as he approached the river and nearly created a tidal wave when he plowed into the water at full speed. 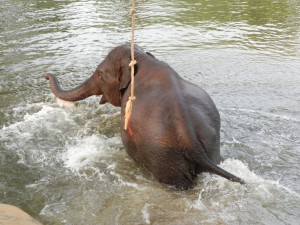 I looked at Piza. He had a cheeky look on his face and I realized that he had allowed Jon to go to the river for me. Piza knows how deeply I want Jon to have some freedom and I am eternally grateful that he created the situation where my last memory of Jon was watching him play with full abandon.

In the river, the scene was “watch out elephants and mahouts-on-elephants, Jon is here!” He flew into the water, eyes intense, wild in anticipation. He ran, hopped, swam and play-charged the other elephants. He literally dove into the water doing a sideways body slam not holding back an ounce of his boundless energy — he was on fire. The mahouts were on guard, but they were happy that Jon was able to experience a moment of fun as well. 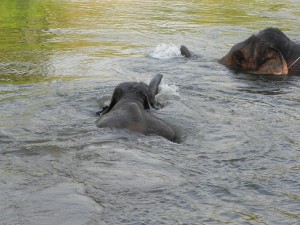 Later, speeding down the paved highway toward the Kanchanaburi bus station, I found myself grateful for my time at Elephant’s World even as I pondered the plight of elephants worldwide. Can we help them? Is it possible to give them their lives back? I am optimistic because to fail them is not an option.

I am thankful for Jon, Piza and all the mahouts. I am especially thankful for all of you who made my unscheduled stay at Elephant’s World possible by your generous support. My life is enriched daily and today I feel like a billionaire.