The Surin Project is a new effort that Lek has undertaken. I was not aware of just how many projects Lek is involved in. Her plate is full.

We arrived in Surin after a 13-hour overnight bus trip. Even though the accommodations on the bus were top of the line, 13 hours in the same seat can wear on you. We joked about being able to fly to Australia and back in the same amount of time. Regardless of the temporary uncomfortable situation, the long bus ride was worth it; no words could effectively describe what we would experience over the next week’s time.

For the Surin trip I joined a group of Elephant Nature Park volunteers from around the world — the US, Australia, England and the Netherlands. It was a diverse and dedicated group of elephant lovers ranging from 16 to 56, what fun!

Lek’s Nature Park Surin Project is in conjunction with the Thai government. In an effort to get elephants off the streets of Bangkok, the Surin Provincial government has set aside 2000 acres. Mahouts are given a place to stay with their elephant and paid to have their elephant on display. Unfortunately, display means chaining the elephant up all day — not much of an improvement for the elephants, but it’s a start. Mahouts are paid extra if they put their elephant in the show that is presented to the public twice daily.

160 elephants currently reside at the government center, half of them males. As you might imagine having so many individually owned elephants in a relatively small area can be challenging. The biggest problem right now is lack of available food for the elephants. The monsoons are late in coming and everything is quite dry. The demand for food has resulted in owners having to drive great distances and pay higher prices to feed their elephants. Many elephants are quite thin as result of the shortage.

The number of calves on grounds is frightening. Each elephant an owner has increases the amount of money he receives from the government. I don’t believe owners are breeding just for the money but it is uncertain what will happen over the next decade with so many calves being born.

The government has big plans for this place. They plan to dump 60 million into developing this project as a tourist destination. Their goal is to return Surin to its previous status as the elephant capital of Thailand.

Everywhere you turn there are elephants; the place feels a bit crowded to me.  It is set up like a reservation with elephants being the prominent fixture of the landscape, tethered under trees, shade structures or in the direct sunlight without shade. Most are alone, unable to interact with other elephants.

A two-year-old calf has caught my attention. She was recently separated from her mom because the mother’s milk supply had dried up. I was also told that the mom was difficult to handle whenever the calf was around so they separated them to gain control over the mom. The calf is seriously thin and has a problem eating grass. She is ravenous, chewing mouthfuls of broad leaf grasses to a pulp. But after chewing the grass she spits it out instead of swallowing it.

The vet was on grounds today. Alex, the project manager, spoke with her at length about this baby.  The problem of ownership, authority and the lack of elephant welfare awareness was offered up as the challenges the vet faces when trying to help one of the elephants.  The vet has no authority to intervene if an elephant is sick and suffering.

The calf’s owner does not live on-grounds but, by sending her to the facility each day, he receives a monthly payment. The calf walks two kilometers roundtrip daily, to be chained on display and make an appearance in the show.

I was so pleased today when the vet engaged Alex regarding the calf’s condition. Her medical history was shared and recommendations for tests that I received from Dr. Mikota were discussed.  Hopefully we will be able to get help for this baby.

In the meantime, I continued to try to find a supplement she will eat. For two days I have been experimenting with different rice mixtures. This afternoon I succeeded and Baby finally started eating. I will keep you posted. 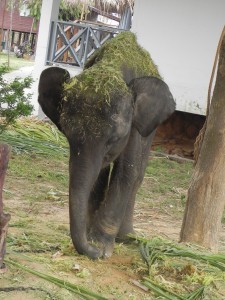