Caring for male elephants in captivity is a challenge at best.

Attempts to provide a quality of life within the parameters dictated by their captivity produce poor results. Their size, natural tendency toward dominance and drive to breed, combined with their innate wildness, is a recipe for disaster in a captive situation.

Males are especially dangerous when they are in musth, a natural biological function when testosterone levels increase. During their annual musth season, captive-held males become too aggressive to approach and stop responding to their mahouts.

EAI respects the true nature of each elephant and would prefer that no elephant live in captivity. But elephants whose lives are forever altered by captivity need our help. 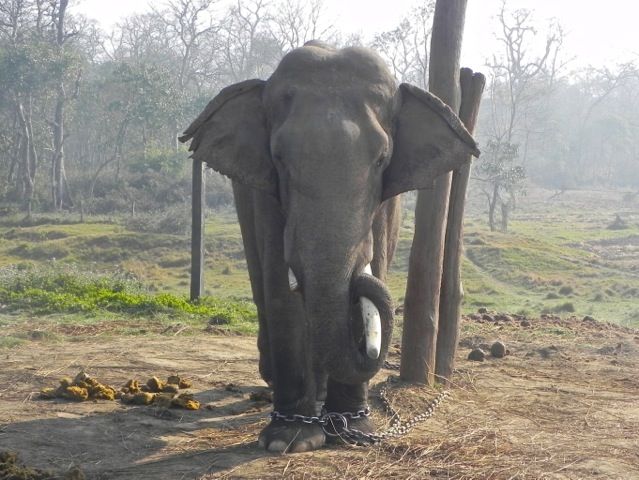 We were building chain-free corrals when Lambodhar Prasad came into musth. He was unapproachable. His front wrists were chained together, secured to a large wooden timber that was buried 10 feet deep to prevent his escape. He had no shelter from the hot sun, the seasonal storms that pellet him with golf ball-size hail or the frightening earthquake that devastated entire villages in Nepal earlier this month.

And he had no access to water to drink unless the mahouts brought it to him.

Because of his aggressive state, mahouts could not get close enough to Lambodhar Prasad to give him water, which concerned them and made them anxious to find a solution. Their only option was to offer Lambodhar Prasad water in a large metal cooking pot.

Out of trunk’s reach, several mahouts struggled to push the heavy pot close to Lambodhar Prasad with a long bamboo pole. A thick handmade rope was tied to one handle of the pot in order to pull it back, out of Lambohdar Prasad’s reach, after he finished drinking.

But things did not go as planned. Lambodhar Prasad was irritable, not in a mood to cooperate. He grabbed the pot with his trunk and before the mahouts could yank it away, he crushed it under his foot.

The mahouts were out of ideas and had no resources to solve the problem, so they came to EAI for help.

An immediate solution was devised, simple but effective.

EAI volunteers headed to town to buy a replacement cooking pot/water dish. We purchased an electric water pump and water hose and hired a plumber to hook it up to the existing well where the mahouts bathe and wash their cloths and dishes. The Chitwan National Parks Department provided a large water storage tank as a back-up for when the electricity is out, which in Nepal is more often then not.

While the plumber was installing the pump, connecting the water hose and setting up the water tank, the mahouts wasted no time wiring the pump at a nearby building.

There are no inspections required or codes for electric and plumbing work at the hattisar. You just do it!

In a couple of hours our solution was up and running. The mahouts were relieved and excited about the prospect of being able to water Lambodhar Prasad and give him a bathe as well.

Then came the moment to test out the new watering system.

As suggested, the mahouts filled the water pot before maneuvering it in front of Lambodhar Prasad. He was seriously thirsty and drank hurriedly for several minutes. But as he quenched his thirst, his drive for dominance surfaced.

The muscles in his face tightened as he grabbed for the pot in an act of defiance. The mahouts recognized his attitude shift and pulled the pot out of his reach. The pot lived to provide water for another day.

Learn how you can support EAI’s pilot project to build Lambodhar Prasad his own steel pipe corral.

Every effort in Nepal is unnecessarily difficult due to limited or nonexistent resources, expertise and motivation. Generations of mahouts have grown to believe that nothing can or will be done to make their job easier or the lives of the elephants in their care better. They have stopped asking for help, or perhaps they never started. 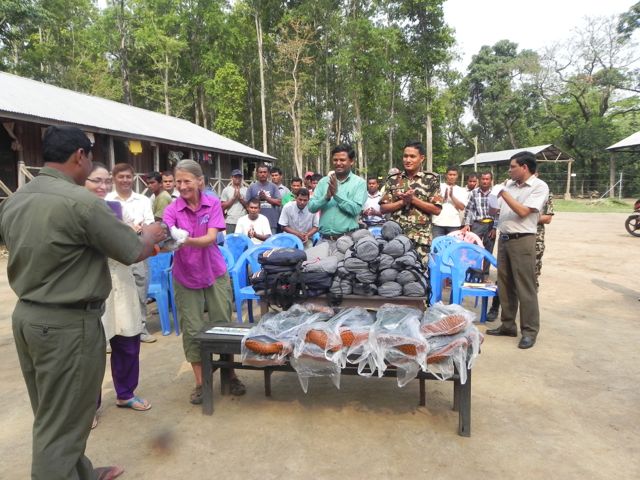 But now, because you, our supporters, have enabled EAI to offer new resources, options and solutions, the mahouts know that there are people who truly care about them and the welfare of their elephants. They have begun to ask for help. They have begun to believe that when they ask, their concerns will be heard and their need for assistance will be answered.

The most encouraging shift we have observed is that mahouts are beginning to speak up for their elephants. Improvements in elephant welfare can be encouraged from the outside but true sustainability comes from within. The mahouts are the key to improved elephant welfare in Nepal. 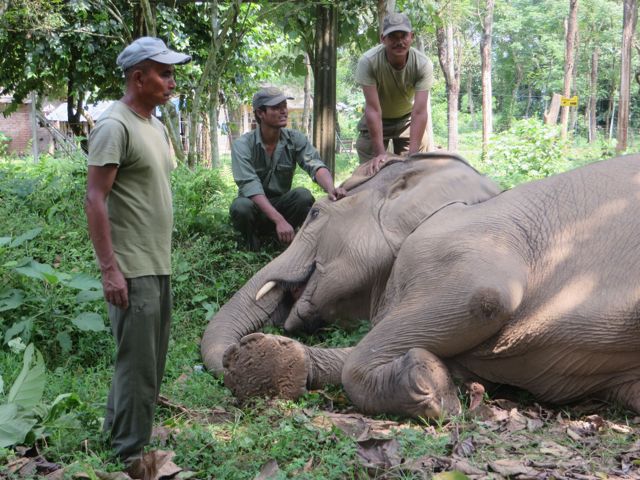 EAI is honored to partner with them. Learn how you can support mahouts and their elephants.