A Tribute to Mel Kali

In 2013, Mel Kali, the senior member of the National Trust for Nature Conservation’s elephant herd, fell ill. It was winter, it was cold and she was suffering from pneumonia.

Being in her early 70s and in poor body condition, her prognosis was not good. In fact, staff told me there was nothing they could do and that she was dying.

Mel Kali’s chain-free corral had been completed only recently. It struck me that after all her years of service she wouldn’t benefit from her new found physical freedom. I was overcome at the thought that nothing could be done medically to ease her pain or address her condition.

Mel Kali had served the Trust well for decades, performing daily anti-poaching surveillance, transporting wildlife researchers and generating funds by providing tourist rides. She was mentioned in many research papers and was even featured in a book, which noted her bravery when encountering tigers inside Chitwan National Park.

It saddened me that Mel Kali would be allowed to suffer and die without any effort to ease her pain. I felt helpless and ineffective.

As I sat watching Mel Kali, I knew I wanted to help her one more time. I had a good relationship with the mahouts and knew that if I asked, they would convince management to let me arrange for treatment for her. Even if she did not survive, she would not suffer.

The mahouts could see I was distraught. But when they tried to comfort me by saying there was nothing we could do, I told them of my plan. All were immediately on board.

I arranged for the best veterinary care available — Kiran Rijal, a local vet tech under the direction of senior government veterinarian Dr. Gairhe.

Within hours Mel Kali’s corral was abuzz with mahouts, veterinary assistance and hope. We were all working together to help her. Her mahout sat on top of her head holding bags of meds and fluids while Kiran attached intravenous drips to the veins in the back of her ears. We administered vitamins and antibiotics to help her fight off the infection that threatened to take her life. And Shanti Chaudhary, head mahout Paspat’s daughter-in-law and a dear friend of mine, sat down at her sewing machine to create a blanket to keep Mel warm. 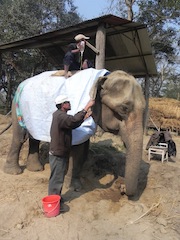 The energy in the hattisar (elephant stable) was alive with hope and camaraderie. Any sense of helplessness was gone. We were united in our effort to help Mel Kali, who was cooperative in every way. There is no doubt she was aware we were doing all we could to help her.

After three days of around-the-clock care it was obvious that Mel was going to recover. So much had changed. In addition to administering medicine, fluids and supplements, we reevaluated Mel’s diet. We added extra rations, including a giant cauldron of cooked rice with molasses and gram, a source of protein, to put weight back on her emaciated body.

EAI put out a call for help and our supporters responded generously. Their donations paid for Mel Kali’s medical treatments, blanket and daily rice and molasses rations for the next many months.

But what followed next was a surprise, without question the most exciting thing to come from her recovery.

Once she was fully recovered, Mel Kali was escorted to the banks of the Rapti River, a short distance from her hattisar, each morning. Then her mahout-escort would say, “Okay go, you’re free.”

Without hesitation Mel Kali would wade into the middle of the river and pause to take several refreshing drinks before continuing to cross into Chitwan National Park. She had no escort, no mahout, no riders, no one to direct her movement or dictate her actions. She had complete autonomy to do whatever she wanted. 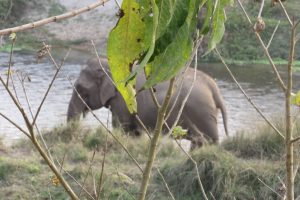 What she wanted was to disappear into the dense jungle each and every day. She was free to wander for the rest of the day and even overnight if she so desired. Many days she could be seen in the company of Renaldo, the resident wild bull elephant. It seems they enjoyed each other’s company. 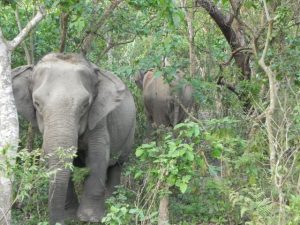 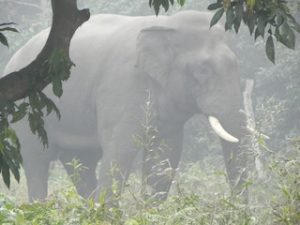 Five adventure-filled years later, Mel Kali continues to thrive. Most evenings she returns to the hattisar on her own. As she approaches the riverside tourists point and exclaim in excitement, “Jungle hatti!” (wild elephant), unaware that Mel Kali is not wild. She wades across the river, scales the embankment (avoiding the curious tourists) and makes her way to the back side of her corral. Many times she has to stop on the narrow dirt footpath until awestruck tourists scamper out of the way. Never does she show aggression or pay any attention to the two-leggeds snapping selfies as she passes by. 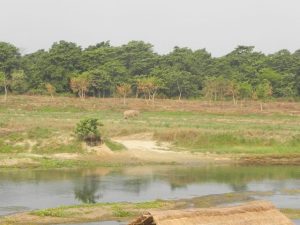 In anticipation of her return, a mahout stands ready to open the gate to her corral.

Like a queen returning to her throne, Mel ambles to the front of her spacious chain-free corral to partake of her cauldron of freshly cooked rice and molasses, a treat that her mahouts enjoy providing as much as she enjoys eating.

No one but me.

Today Mel Kali is not only the most famous elephant in all of Chitwan National Park, she is also known as the healthiest elephant in the region. She is living a new model in the world of captive-held elephants, a model that respects her lifetime of service and recognizes that freedom from human control is her birthright. 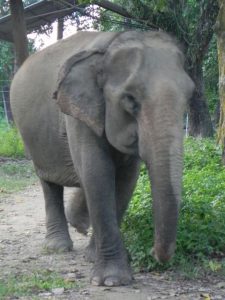