Finally…I have seen my first wild elephants. Two small herds: one with four females — two adults with two young calves; the other with two young calves, two adults and an adolescent tusker. They grazed on the tender grass growing in the speckled shade, protected from the direct sunlight by a mature canopy. Our presence went undetected as we, following the rules, did not stop our vehicle. It was a calming sight to behold. 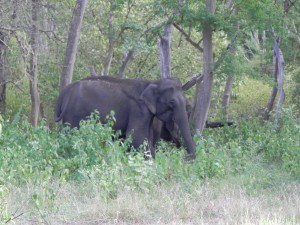 My time was spent meeting the forest authorities, including veterinarian Dr. Kalai, who toured me through the facility. The pride he has for his work was obvious. Knowledgeable and engaging, Dr. Kalai was a fountain of information about how the camp operates.

It makes sense that the wealth of knowledge Asia’s experts possess about their elephants is unmatched by any other nation. Living with this indigenous species has provided Asia with a wealth of knowledge, not only of elephant life in the wild and captivity but, more recently, the challenge that is threatening the Asian elephant’s existence: human-elephant conflict. The forest personnel, professors, biologists and researchers I’ve met all show a genuine desire to find solutions before it is too late. So many bright and dedicated people unified to save this flagship species so important to its habit and fellow creatures, including mankind.

This forest camp is expertly run from top to bottom. In the food prep area the camp elephants’ diets were listed on a huge board with the ingredients and supplements included in individual diets. I got my first look at the “cooked” diets I had heard so much about. Lined up in neat rows on the diet table were blocks of precooked foods recently removed from their moulds.  Some were topped with salt and other additives, sitting ready for the next stage in the process of elephant diet making. 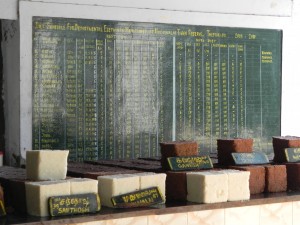 Sanctuary volunteers who tired of the endless produce chopping which dominated their service at the Sanctuary have nothing on the assistant mahouts in these camps. They are solely responsible for measuring, cooking, moulding and finally hand mixing each elephant’s diet, a process that demands precision and effort, not to mention repetition. Needless to say I was impressed.

Only a few days before my visit an infant calf had to be rescued after being attacked by a crocodile. He survived the attack but his mother and family could not be located. Every effort possible is made to avoid bringing a calf into captivity but in this case there was no other choice.

I observed firsthand that, indeed it takes a village, or should I say a tribe, to hand raise an elephant calf. The family responsible for this calf’s care had only recently turned over parenting of a young female calf they had raised for the past three years. They surely needed a break from the constant demand of a baby but took the new orphan in without question.

Watching the parenting dance the family gracefully engaged in was mesmerizing. The father of the family was the calf’s primary caregiver. The matriarch prepared and provided the formula. The veterinarian directed veterinary care, which was provided by the veterinary technician. Each person has a role to play in the calf’s care. An older child assisted with tasks to support the calf’s care and medical treatment and a young granddaughter babysat, expertly I must say. They did not actually fawn over the calf but provided the security he needed. So young, he was obviously unable to understand his circumstances. Relying on survival instinct he followed around after a warm body. I am told that in a few weeks he will differentiate between the warm bodies but for now any warm body will do. 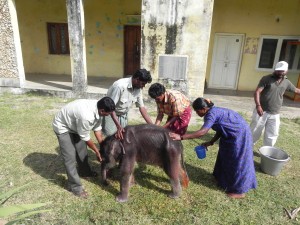 His wounds were deep and treatment was painful. Throughout, his entire family showed care and gentleness, their skills expert, their compassion palatable. My heart went out to this little guy, who was sort of walking in a fog but, if he had to be separate from his mother and herd, he could not have been in better hands. 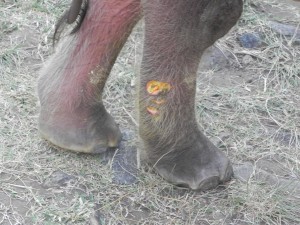