When Nandu learned that I wanted to accompany Sweetie Kali on her anti-poaching patrol he directed me to Ram Kumar who graciously cleared my request with Paspat, the mahout supervisor. Realizing how much is lost in translation, I felt it best to experience Sweetie’s patrol duty first hand. I planned to walk instead of ride, which, for the most part, I did.

It was reassuring to watch Sweetie Kali voluntarily exit her yard without hesitation. The deepest concern shared by mahouts was that after being chain-free she would refuse to respond to her mahout. That fear has proven to be unfounded. 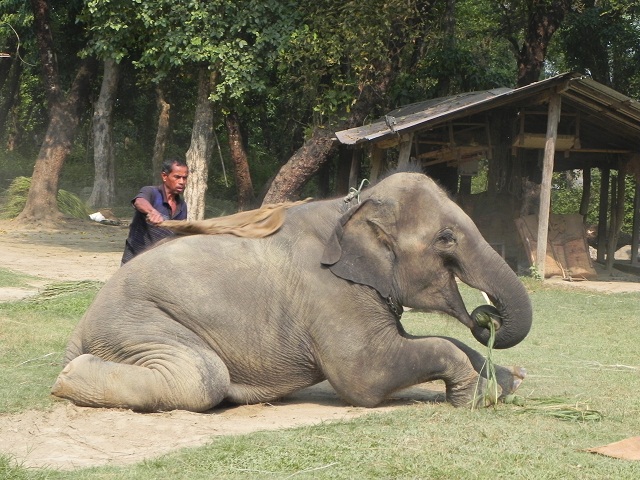 Puntea, Sweetie’s phonet (lead mahout) used a burlap bag to “slap off” the thick layer of fine dirt Sweetie had spent the last several hours throwing on her back. In places where the dirt was very thick he struck her firmly with blunt side of his crew pa (machete), creating an avalanche of silt cascading to the ground.

This approach to sweeping dirt off Sweetie appears a bit rough and indeed it is. But she showed no concern, moving gracefully from a lying, to half-sitting and then standing position to accommodate the process.  I did catch myself questioning—for the umpteenth time–why the mahouts handle their elephants in such a rough manner.  Nothing is gentle — not a touch or a word; no silent tactile moment of praise.

Reconsidering the decision to walk

In seconds we were on our way, me with a satchel of essentials — camera, water, hat, umbrella and Chap Stick — and Puntea perched on Sweetie Kali’s back with the multi-functional burlap bag as a seat cushion. He carried a small wooden switch and badly tattered umbrella. I noticed immediately that he was not carrying a bottle of water and mistakenly took it as a sign that our outing would not be rugged.

Keeping pace with Sweetie on foot was no problem. Her mahout allowed her to amble at a comfortable speed. 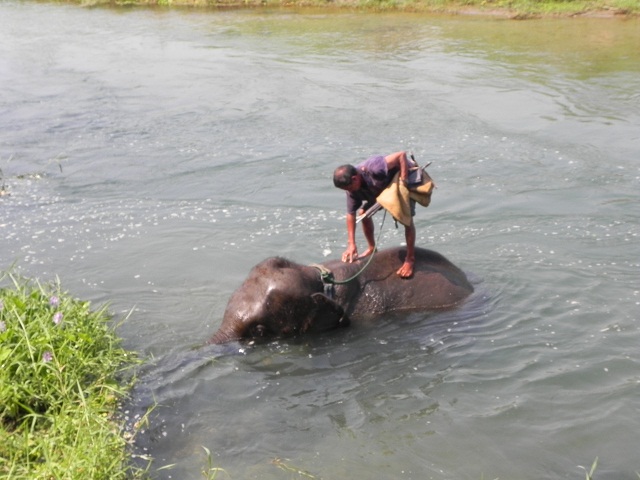 Our first stop was the river — spectacular. With ease, Sweetie Kali submerged herself in the water with Puntea still perched atop her back. He managed not to get so much as a toe wet — for what reason I don’t know, since it was already sweltering hot. Following one word commands, Sweetie tilted from side to side in the strong current, bobbing like a buoy.

At this point I realized my plan to make this excursion on foot was flawed. The current would make crossing a challenge but the bigger issue was slithering down the river in our direction—a large crocodile.  Apologizing to Sweetie for the extra burden, I clambered aboard and we crossed safely to the opposite shore.

In front of us lay a vast grassland, high as an elephant’s eye, as the saying goes. In stark contrast, in the hazy distance rose a mountain range dense in vegetation, its forest seeming to pulsate in the early morning heat.

As Sweetie effortlessly ambled through the tall grass she reached to the side, grasped a trunkful of grass, pulled it tight and, with her next step, severed it at the soil line with a strike of her foot. All this without missing a step.

I remember watching in awe at the Sanctuary the first time I watched Jenny cutting grass in the same manner as she grazed.  With each step she’d grab a trunkful of grass, casually swung her foot forward and effortlessly sever the grass with her toenails. There is quite a hypnotizing, even relaxing, rhythm to this action. The abrasive quality of grass works as a natural trimming tool; this is one way elephants keep their nails, cuticles and pads trimmed to a healthy length. 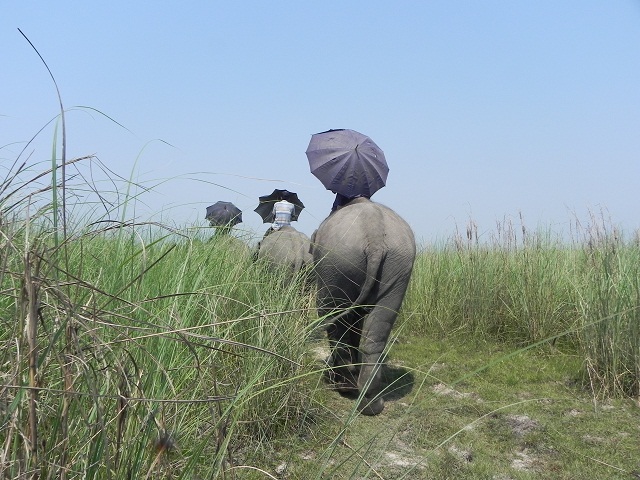 We traveled in complete silence for some time, umbrellas balanced overhead to shade ourselves from the scorching sun. But soon the silence was pierced when from out of nowhere we were joined by two young elephants and their mahouts. For the next five hours the mahouts chattered nonstop, like school girls at a slumber party. Since I don’t speak the language, I soon drifted off into my own world, taking in every scent and plant and animal sighting.

Two hours into our patrol we approached a circle of high arching trees where many elephants and mahouts had gathered. Some mahouts were sprawled out, fast asleep on elephant back, while others napped on the ground while elephants grazed close by.

In the middle of the partially shaded clearing an energetic young mahout was putting his equally young elephant through what appeared to be a training exercise.

I breathed a sigh of relief to think we were about to take a break. I was ready to continue this excursion on foot as planned. But instead of stopping we crossed through the clearing, exiting the other side.

The next hour-and-a-half was spent in serious patrolling, or at least that is how it appeared. The mahouts ventured off the trail continually, ducking under low hanging trees scouring the undergrowth for “something.”  Obviously they never found what they were looking for or I would know what it was. 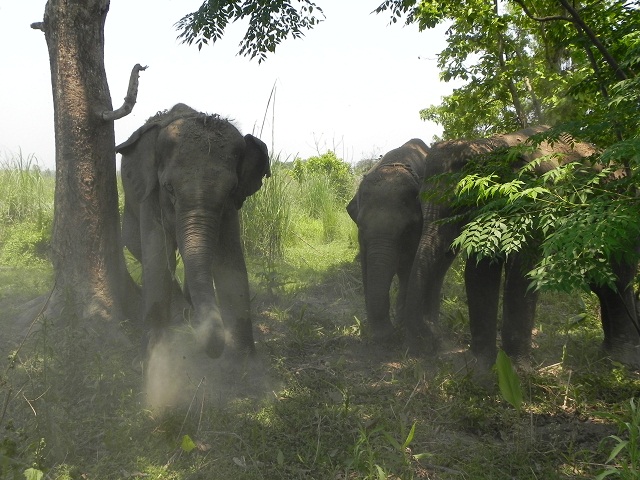 Then we came upon a circle of towering shade trees that created the perfect place for a rest stop. We no sooner disembarked when all three elephants moved outside the circle to cover their bodies with a fine layer of dirt flung effortlessly onto their backs.

I watched silently, wondering if they would exchange tactile greeting or show any sign of recognition. Although they stood centimeters from each other, they acted as if the other did not exist. The lack of physical interaction seemed so unnatural, and unfortunate. These three girls, close to the same age, have so much in common, including knowing that forming relationships with each other was discouraged by their mahouts.

They grazed the tall grass while we napped, burlap bags used as bed rolls.  About fifteen minutes into our slumber Sweetie Kali tiptoed over to my sleeping spot. I felt her approach.  When realizing she intended to make a personal visit I casually propped myself up into a sitting position from where I could quickly stand if need be — and cleared my throat. I would have loved to share a special moment with Sweetie but the truth is, we do not have a relationship and having her so close could be dangerous.

I know from experience that even while asleep, mahouts are on high alert. Hearing my unspoken warning sign, Puntea got to his feet and Sweetie retreated to the company of the other elephants. 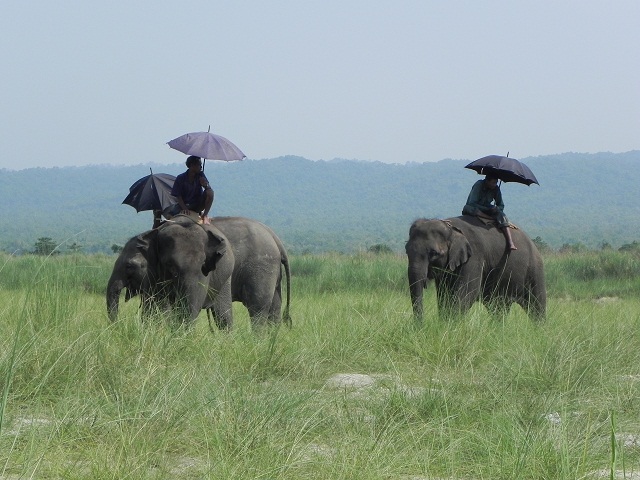 The day was long and hot for everyone concerned. When we reached an offshoot of the river the elephants submerged while the mahouts quenched their thirst from a spring oozing from the side of the bank. All parties drank their fill.

The next hour was spent leisurely grazing the sandy grassland that borders the river. When we finally crossed we were immediately immersed in a dense vibrant forest. The temperature dropped by at least ten degrees, the trees blocked the glare and penetrating heat from the sun.

Umbrellas were closed and stored, mine in my satchel and others, hung by the handle from the back of the mahout’s shirt. What a novel idea and handy hanging location; the neckline of the shirt works perfectly.

Tree branches invaded the trail, making passage difficult.  I was told that the noise in the trees was monkeys but I never caught a glimpse of one. Spotted deer and birds were abundant. At least one tiger had walked the same sandy path recently, leaving behind huge paw prints. Seeing the size of the prints made me reconsider—once again— my decision to walk instead of ride.

Soon and without a verbal farewell, our fellow patrollers turned off at different paths, disappearing into the dense bush, on their way to a different hattisar. As we traveled the last mile of our patrol I was lost in thought about the relationship between mahout and elephant. It is a strange one — no outward display of affection, no praise, continual directions and corrections. It takes a strong individual to do this job day in and day out, both elephant and human.