Our Dear Lottie Has Passed Away

Loyal, dependable, calm, an unconditional friend to all; Lottie was a loving sister and the matriarchal energy to all of the divas. She blessed everyone with her wisdom, always cooperative and engaged. Her patience with Minnie was magic. At times when Minnie would work herself into a pushing frenzy on fences or other elephants, Lottie would calm her down with a silent gentle trunk touch. 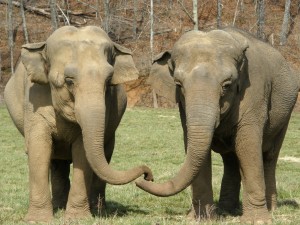 When night time temperatures forced Lottie inside, she would rumble repeatedly until Minnie finally joined her in the warm barn. Minnie would  stay inside long enough to grab some food and swallow a few trunkfuls of water before dashing out of the rubber flap door. Racing down the hill to the moon-lit habitat, Minnie would plunge into the pond, dragging a log from the muddy bottom. Or dash across the pasture, kicking up clumps of grass with her toe nails like a golfer’s divots in the manicured lawns of a golf course.

Lottie would remain inside benefiting from the “me” time, getting pets and dried cranberries, her favorite treat. Lottie would stand completely still except to gently guide my hand up to her tusk socket. She had very short, almost nonexistent tushes. She loved to get me to massage the inside of the tusk socket. Her eye lids would flutter and she would let out a low rumble. If the massage stopped, her eyes would pop open and again she would softly reach out for my hand and guide it back to the tusk socket. A kinder, gentler elephant you will never meet. 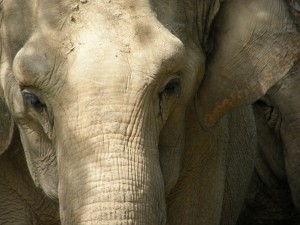 Lottie’s estimated birth year was 1963. Since moving to the Sanctuary at 12pm CT, January 31, 2006, Lottie was the picture of sound health. She had healthy feet, a good appetite, and always remained at her optimum weight. She drank well, stayed physically active and was extremely calm. Mostly she was Minnie’s best friend. These two had a powerfully loving relationship. 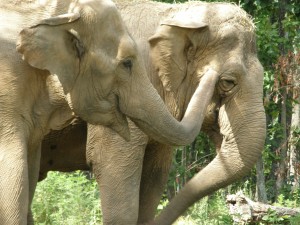 Although Lottie seldom engaged in physical play with Minnie, she was never far from her friend. 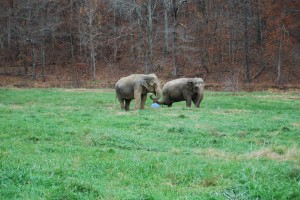 They grazed, bathed and slept side by side. Sometimes in the early afternoon Minnie would wander away from Lottie as she slept. If Lottie woke and could not see Minnie the drama would unfold. Lottie would let out a loud squeak and then another, raising her head in an anxious posture looking around for Minnie, who would respond with a throaty bellow. When the two finally heard the other they would break into a run, full speed ahead, screaming at the top of their lungs. When they were finally reunited Minnie would spin circles around Lottie whose eyes would twinkle as she chirped and squealed in delight. Trunk touches all over, followed by powerful trumpets and then relaxed sighs, and the greeting was complete. 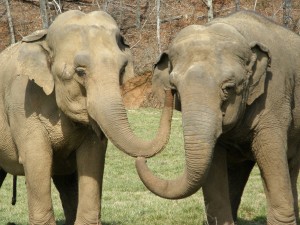 Without hesitation they would resume their grazing as if no emotional display of affection had taken place. But if you were close by, you would feel the air permeated with love. Then they would wander off again on another adventure. They lived for each others company. 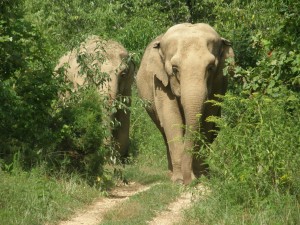 Lottie had a silly side, reserved but silly. One time, when my winter hat had gone missing during a 10pm feed, Lottie was later seen sporting it fashionably on her back. It was hardly recognizable, a bit worse for wear but still an attractive accessory — at least Lottie thought so. It hardly resembled a hat at all as Lottie had chewed it, pulled it apart at the seams and ground it into the dirt before finally tossing it onto her back. 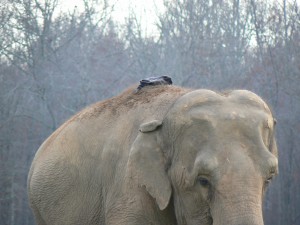 Mostly Lottie will be remembered for her nurturing nature and deep affection for Queenie and Minnie. 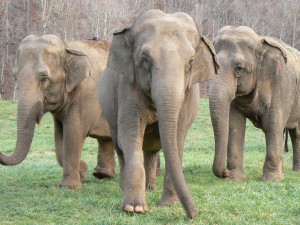 After Queenie passed away two years ago Lottie and Minnie grieved desperately. The two grew even closer and helped each other through their loss. Now Minnie has a heartbreaking challenge ahead of her. She and Lottie had been together for four decades: this separation will be difficult. Hopefully Minnie will be able to face her loss with an open heart and not put on the “tough guy” act that was her mode of operation in the past. If Minnie puts up a wall to the pain and acts as if she is not hurting, recovery will be that much more difficult for her. We have to trust that Minnie will be able to allow Debbie and Ronnie back into her life so they can help her through this difficult time.