What I have witnessed over the past 24 hours has been both heart wrenching and illuminating. Change is indeed the only constant we can depend on. Learning seems to come in a consistent formula — two steps forward, one step back and, at other times, giant leaps in either direction. But one thing is for sure: any suggestion that the process of life’s lessons moves in a linear direction is illogical.

Yesterday afternoon as Piza was bringing Jon back from his morning foraging, they met up with another mahout carrying an armful of freshly cut produce. Jon was interested in the food but was told that he could not have it. In an instant, his cooperative attitude flipped to rage.

Piza recognized the flare in Jon’s eye as a signal that he was about to act aggressively toward the other mahout. When Jon moved toward the food, Piza, working upon instinct and his dominance-based training, struck Jon across the leg with the handle of his hook. Jon’s reaction was instantaneous and life threatening: he turned on Piza.

I was not present but was told that Jon first kicked Piza with his front foot and then swung his head, knocking Piza down. What came next was pure instinct on Jon’s part, the wild bull in him still smoldering below the surface. He lunged toward Piza, who was attempting to regain his footing and put distance between him and the outburst. Blinded by his rage, Jon tried to pin him under his tiny tusks. Piza escaped with a few bruises, but no broken bones or internal injury, and a deeper knowledge and respect for Jon’s nature.

This behavior was not new for Jon; in fact, it is why Elephant’s World invited me to come and work with him. Jon arrived at EW only two months ago and no one seemed surprised by this most recent outburst.

With Piza rushed to the hospital for x-rays, the other mahouts were left to secure Jon on his chain. What followed was not the scene I expected. The mahouts worked calmly, systematically, and, I must admit, quite humanely. Jon remained defiant, a cover for his fear of what he assumed the mahouts would do to him once he was recaptured. He avoided their attempts to get him to cooperate, which of course made things a little tense.

The mahouts were calm and patient, and watchful for their own safety. Jon was given every opportunity to cooperate but we all understand why he was apprehensive. He is a wild male elephant living in a human’s world facing the greatest challenge thrust on anyone — denying his nature.

The mahouts surrounded Jon. At no time did he fully submit, but he finally resigned himself to the fact that he was outnumbered. The leg shackles he had worn when I first arrived, the long drag chain and nail-tipped bamboo poles, were reinstated. Jon had no choice but to acquiesce. Deep inside I know that Jon is smart enough to figure out his lot in this life, that the best thing he can do for himself is to find his strength in cooperation rather than defiance.

When I asked the mahouts if they felt Jon’s new training had contributed to his aggressive outburst, they said no and appeared genuinely surprised by the suggestion. They spoke of Jon’s actions as an emotional outburst of anger as opposed to a conscious choice simply to be defiant. They clearly saw that Jon had a temper tantrum when he did not get the food he wanted and were completely comfortable recognizing and acknowledging that Jon is an emotional being.

Modern science is slowly accepting what astute mahouts have known for centuries: elephants are highly intelligent and emotional beings. One mahout spoke for the rest when he said that they were happy I was working with them because the elephants seem, in his words, happier.

This morning I waited until the mahouts were off-grounds collecting food for the elephants before going to check on Jon. He did not act particularly emotional. He did not appear fearful, angry or despondent. He was not exhibiting stereotypical behavior, but did appear hungry. Although I do not concur, I do understand that the mahouts’ method of dealing with Jon’s attack includes withholding or reducing food. This method is not limited to Asia; it is used by some elephant trainers in the US today.

For nearly one hour I watched Jon, without focusing too much energy on him. Tears streamed down my face at his fate, wild and captive. I wondered if there is anything we can do to make the injustice of that reality right again. With no safe wild left to elephants, it is up to us to create an alternative, one that protects and respects this species that so many of us are drawn to.

I will admit to being relieved that in the hour I observed Jon he never engaged in stereotypical behavior or acted stressed. He was not angry and did not even display signs of being confused. He was not despondent, he was resigned. And, thankfully, he was relaxed enough to play. A large rope had been wrapped around the tree he was chained to. Jon flipped the rope over his neck and wiggled his head back and forth, tugging on the rope playfully with his ears. I heard a huge sigh leave my body; I don’t know how long I had been holding my breath.

As I left Jon, I could not help but ponder the dilemma humans have created for our planet and her inhabitants. Deep in thought, I realized that an EW staff member was waving her arms trying to get my attention. Looking in the direction she was pointing, I saw Jon in the banana plantation, happily reaching for the highest leaf and, with much gusto, tearing it loose and stuffing it into his mouth.

I assumed that Jon had slipped his chain. I decided to try to head him off by getting to the food hut first and loading up on his favorite treat. I felt confident that if I could drop a trail of bananas, I could get him to follow me back to his stable area.

When I got to the hut I was surprised to see Piza casually lounging in one of the flimsy plastic chairs, watching the DVD I had given him of “All Our Girls so Far.” I hesitated for a moment, so pleased he was watching the video of my girls, but realized I must interrupt him with the news of Jon.

With my best body language yet, arms flailing and in ridiculous broken English — yes, broken English. That’s what happens when everyone you talk with speaks broken English. You begin to speak like them! — I told Piza about Jon being loose. He smiled and said it was okay. I thought perhaps Piza had suffered a concussion and didn’t understand what I was saying — that Jon was loose! — but a huge grin spread across his face again, and I understood.

Even though Piza had told me last night that Jon would be kept on chains for up to three days, he had decided that Jon was ready for a degree of freedom. It was then that I remembered that Piza had said Jon would be kept on chains until he was no longer angry. I had seen for myself earlier in the day that Jon was not angry. Piza was true to his word and, as a result, Jon was having a feast in the banana forest.

Once I understood that all was well and Jon was no longer being punished, I turned to thank Piza. When our eyes met I felt deep admiration for this young man. He has such love and respect for Jon. In my heart I know that these two are matched souls, brothers from another time. They are meant to teach each other and the world about what it means to be held captive, because the mahouts are no less captive to the elephants than the elephants are to them. Let’s dream that together Jon and Piza will make a new world for captive elephants. 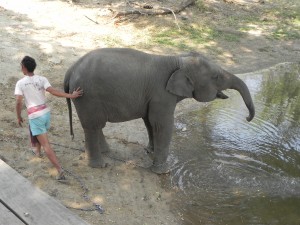