One year ago today my life took an unexpected turn. At the time I would never have imagined that today, exactly one year later, I would be party to the rescue of an elephant in Surin, Thailand.

Hours after arriving in Bangkok I boarded a train to Surin to meet up with Lek, founder of the Elephant Nature Park (ENP). I knew we would be observing elephants at the annual elephant round-up and meet with the governor of Surin. But I did not realize that in less than 48 hours we would rescue an elephant, load her for transport and move her to ENP.

Observing the entire procedure was an opportunity for me to learn more about how elephant rescues take place in Thailand. Quite different from rescues in the US, all arrangements, including payment for the elephant, travel logistics, health status report and travel papers, were concluded in a matter of hours.

This rescue was made possible partly by a 9-year-old New Zealand boy named Jack. He visited ENP with his parents nearly two years ago and left determined to raise the funds to rescue an elephant. He reached his goal in a short eighteen months.  Over the past three days Jack took an active role in preparing for the rescue, including purchasing elephant food for the trip. He was given the honor of choosing a new name for the elephant, a tradition held by ENP to give the elephant a new start. Jack researched the name himself and chose Kwan Jai, which in Thai means beloved. Kwan Jai, estimated to be 55 years old, is thin and dehydrated.  A serious logging accident left her crippled years ago. The break in her back right leg led to a misalignment of her spin, making working difficult. But even elephants with broken legs are used for street begging and tourist rides.

Prior to loading Kwan Jai into the straight-bed truck, mahouts, veterinarian, Lek, Darrick (Lek’s husband), Antoinette (of Bring the Elephant Home) and several volunteers, along with Jack and his proud parents, spent the next two hours securing the vehicle for a safe trip. 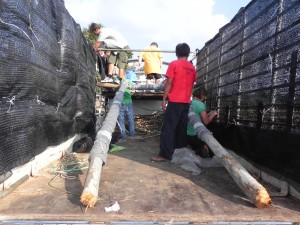 They strapped wind-break material along the side walls of the truck and built a corral of large timbers ensuring that Kwan Jai would stand safely in the center of the truck bed. 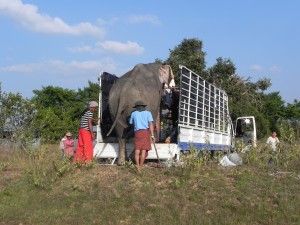 Kwan Jai is a seasoned travel, so she loaded into the truck without hesitation. 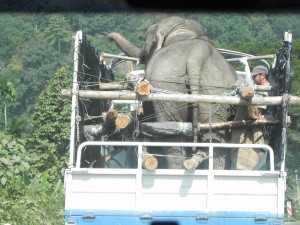 Nearly 24 hours later, driving through the night and a good part of the next day, Kwan Jai arrived at her forever home at the Elephant Nature Park.

What an honor it was to be a part of the life-changing event not only for Kwan Jai but for all the people involved.