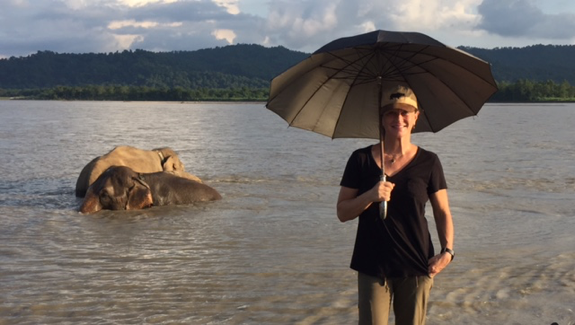 Sarah Shaw believes that some people are fortunate to live multiple lives in the span of one lifetime. Sarah recently embarked on her fourth life, as the founder of the Nature Defense Foundation and the Sindisa Sanctuary, a 125-acre off-grid paradise for rescued animals and retreat for humans to “re-wild their souls.”

In her first life as a dancer, Sarah probably never envisioned that one day she’d be spending four days a week checking water lines, fencing and bee hives, and concerning herself with the foot health of horses, alpacas, Choctaw ponies, pigs and a mule. 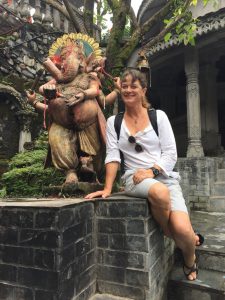 From an early age through her teens, Sarah devoted her life to dancing – talented enough to become a three-year member of the Alvin Ailey American Dance Theater, until an injury forced her to question her life’s direction. That’s when Sarah entered her second life, as a Boston University student. While pursuing her political science degree, Sarah interned with the Wilderness Society where her earliest interest in environmental issues sparked.

After graduation from Boston University, Sarah returned to her home state of California and began her third life as a fashionista/entrepreneur. Tapping into her dance company costume knowledge, Sarah began making fashionable clothing to sell to boutiques. “It started as typical 80’s lycra-dance garb, but it grew really fast and did really well,” said Sarah. Soon, she was managing three of her own upscale clothing boutiques in the San Francisco Bay area.

“But my weekend passion project was volunteering for a local dog rescue in San Francisco. I’d pack my Mini Cooper with dogs, wash and groom them, and help prepare them for foster homes.”
It was also during her entrepreneurial life when Sarah got involved with documentary projects, including Louie Psihoyos’ “The Cove,” a film about brutal practices with marine mammals, and “Racing Extinction,” which follows undercover activists trying to stave off human-made mass extinction.

Inspired by Dame Daphne Sheldrick’s “Love, Life and Elephants: An African Love Story,” Sarah traveled to the continent several times, including volunteering at a South African elephant sanctuary. Burned out after 15 years of clothing boutique management, Sarah sold her stores and bought the 125-acre northern California property, intending to create her own sanctuary for retired zoo and circus elephants. 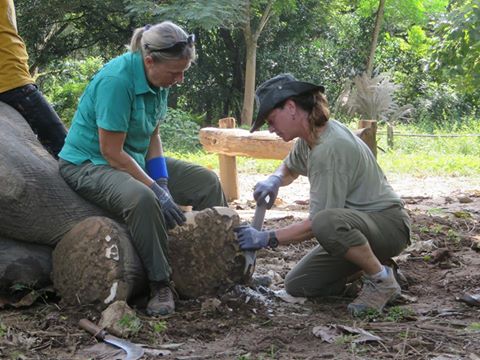 Sarah followed the work of Elephant Aid International (EAI) founder, Carol Buckley, for a year before cold calling her to seek advice. “While I had made several calls to other sanctuaries, Carol was the only one who would talk to me and answer my many questions about whether or not my property was the right place for an elephant sanctuary. After getting to know Carol a little bit I ended up joining her elephant foot care clinic in Nepal for two weeks to get some hands-on experience with Carol and the elephants.”

Almost simultaneously, Sarah took on another elephant-sized challenge. Sarah’s grandparents had created a family foundation in the 1960’s, but in 2015 they decided to reorganize it into two separate foundations: one that Sarah’s cousin would manage, focusing on social justice and prison reform, and the other that Sarah would steward, concentrating on animal welfare and the environment. “Nature Defense Foundation was an inherited role, and one that came upon me quickly and unexpectedly, but would allow me to affect real change,” said Sarah. “My work with NDF is every day no matter where I am. My relationships with about half of my grantees is very deep and hands on.”

Nature Defense Foundation made a $500,000 grant to Elephant Aid International in 2016 that, combined with an anonymous donor and a secured loan, allowed it to purchase the $2.5 million Attapulgus, Georgia property for Elephant Refuge North America (ERNA). While Sonoma County refused to issue a permit for Sarah to launch her own elephant sanctuary in California, Sarah continues to channel her passion for elephant welfare as an EAI Executive Council member, one of EAI’s most generous benefactors, and the driving force behind EAI’s most recent $50,000 Crowdrise matching campaign.

The Zulu word for “rescue and rehabilitate,” Sindisa has now become central to Sarah’s fourth life, as a place where farm animals can mend and people can unwind, unplug, get muddy with pigs, and learn the truth about farm animals in our food system. “There is amazing energy at this place. We have eight of the approximately 200 remaining Native American Choctaw Ponies left in the U.S. Watching the herd run across the ridge and witnessing their freedom is magical.”

Sarah’s plan is to grow Sindisa into its full potential, hosting group retreats and developing animal welfare curriculum for area schools. EAI is proud to count Sarah as part of its Founding Herd, and someone who is dedicating her fourth life to raising awareness around the fact that all animals are sentient beings who deserve fundamental rights and compassion.