My work in Sauraha has come to an end, at least for the time being.  Seeds of change have been planted. From the looks of it, some seeds are already growing, quietly shifting the soil around their sprouting roots. Experiencing the fruits of my labor so instantaneously fills me with hope.

Yesterday when Kiran and I arrived for Bhadra’s morning session we were told that Ramji, his mahout, was off making preparations for the New Year’s Day celebration. I jumped at the chance to work with Bhadra in Ramji’s absence.  But my excitement was quickly doused when Bhadra made it perfectly clear that he would work with me but under protest.

After completing each request Bhadra would do a mini mock lunge from behind the protective barrier. It seemed that he was clearly bothered about something to do with me. He was responding but being snotty. I have seen this type of behavior before when training a new mahout who struggles to keep pace with an advanced elephant student. I did not make that analogy until sometime later.

The next day, the motivation behind Bhadra’s behavior became apparent. In our absence, Ramji had risen to a challenge from Kiran to prove his skill with Bhadra within three months. The ultimate goal: to show everyone how far he could take Bhadra with positive reinforcement training.

Ramji proved his skills beyond question when he surprised us by calling Bhadra from the protection of the corral and proceeded to ask him to present his feet and ears, move to the side, back up and put his head down. I was stunned. They were fabulous. Ramji, all cool, calm, and collected, Bhadra listening intently and responding to each verbal cue. I wish you could have been there to see it for yourself, but I did catch it on video. This type of breakthrough must be documented in order for others to believe. 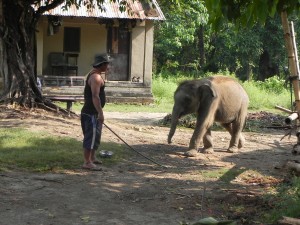 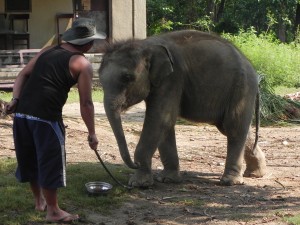 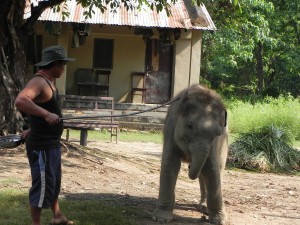 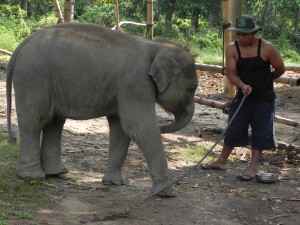 Needless to say, Kiran was pleasantly surprised at the immediate progress in less than a week!  Ramji obviously took the challenge seriously, resulting in a display that had me grinning from ear to ear, joyful with disbelief.

Ramji earned much deserved respect today, and Bhadra…well, he already has my heart. He has now joined the ranks of the “MIGHTY TYKES,” the young elephants in Thailand and now Nepal participating in this important case study of positive reinforcement training. These youngsters are the hope of the future: what they teach us and their mahouts will shape elephant training of the future. They are demonstrating how positive reinforcement training can be used with captive elephants in a hands-on working situation.  We owe them and their mahouts a great debt of gratitude.

Kiran knew instinctively that witnessing Bhadra and Ramji’s incredible accomplishments would make my day, my last in Sauraha. It was wonderful to see how proud he was. Kiran has been an invaluable asset throughout the training process. I doubt he realizes the role he has played in this cultural shift of mahout attitudes, which has the potential to change the future for captive elephants. The future is bright indeed.

I left Sauraha today with a heavy heart, heavy with the joy of knowing that we have planted a seed. I for one cannot wait to see how it grows.