Elephants I have known | Honoring Memories

World Animal Day was created to help raise the status of animals to improve welfare standards around the globe. It is befitting to commemorate this day by paying tribute to four elephants in Nepal who recently died. Each made profound contributions to wildlife conservation efforts for more than five decades. I am forever grateful for everything these amazing beings taught me.

Dipendra Gaj, Rup Kali, Kirti Kali and Sundar Mala were all members of a select group of anti-poaching patrol elephants deployed daily in Chitwan National Park. For decades they worked dawn to dusk protecting wildlife. When they returned to their shelter each evening, their front feet were shackled together with heavy chains to restrict their movement. They spent every night of their lives isolated from fellow elephants, including their offspring.

Captive life for these elephants was never easy. Neither were the lives of their mahouts (keepers). Together these conservation rangers did their jobs obediently, rain or shine, day in and day out. Their success at protecting wild rhinos and tigers is the pride of the conservation world.

Elephants, of course, are an endangered species, designated by Nepal as a heritage animal. These four elephants were wild born, but because they ended up in captivity, their value was diminished in the eyes of their human overlords.

I honor these elephants by sharing their stories, by telling the truth about who they were, how they lived and how much they contributed to conservation in Chitwan National Park. In speaking openly about these four brave elephants, I hope not to cause outrage and protests, but to bring about change for their surviving captive-held brethren. 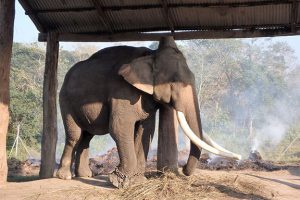 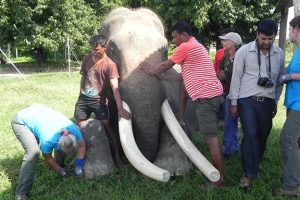 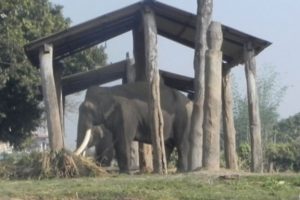 Dipendra Gaj was a magnificent bull who was resigned to his duty. Forced to comply with every demand made upon him, he never lost his sense of self. He seemed to overlook the demeaning aspects of his life and remain proud of being an impressive bull elephant. It was my greatest honor to trim his feet twice a year. His superior cognitive abilities and willingness to accept care made his mahouts so very proud. Dipendra Gaj died in his mid 50’s–too young–after losing his battle with the human strain of tuberculosis. 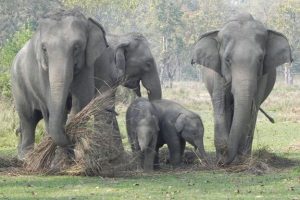 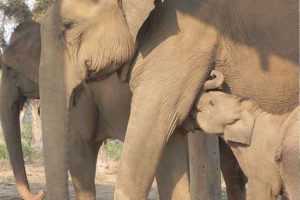 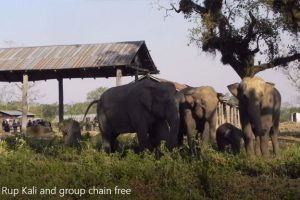 Rup Kali was a wise mother and grandmother. Captured from the wild at a young age, she was forced into servitude. Her official anti-poaching patrol duty spanned nearly 60 years.

When we first met Rup Kali, she was “auntie” to two calves, one four months old, and the other five months. The calves were left unchained so they were free to wander through the hattisar (elephant stable) to socialize with the chained adults. They developed a deep relationship with Rup Kali, spending more time with her than with their own mothers. Rup Kali responded by developing milk and nursing both calves.

In 2015, Rup Kali was released into a chain-free corral built by EAI, which she shared with the two calves and their mothers. The elephants were overwhelmed by their new circumstances and melted into one another, forming the unbreakable bonds elephant families are renowned for.

Later, Rup Kali was moved to a remote hattisar where she was semi-retired. After losing her last set of teeth, she became thin. EAI provided her with a coat this past winter, which she wore willingly. This spring, Rup Kali died of natural causes. She was in her seventies. 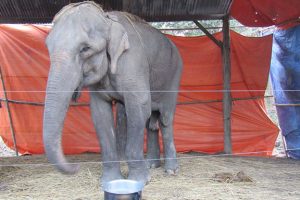 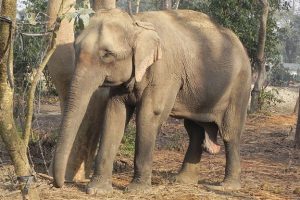 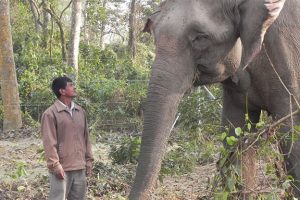 Kirti Kali had a long, documented history of conservation work and giving tourist rides. She was a member of a group of elephants who were isolated from each other under separate tin shelters, and never allowed to socialize.

Kirti Kali was one of two elephants who provided elephant back safaris in Chitwan National Park. Her anti-poaching patrol duties meant long days in the sweltering summer heat and harsh winter cold. She was also required to provide tourist rides every dawn and dusk. The majority of riders were Nepali VIPs receiving special tours of the park (all other safaris take place outside the park in buffer zone forests). It was reported that the funds she generated paid staff salaries.

Midlife, Kirti Kali developed a severe case of carcinomas that affected her gait and subsequently her foot health. Over time she became thin and remained that way until her death.

In 2014, Kirti Kali was one of five elephants to receive a chain-free corral built by EAI. At first, her mahouts resisted allowing her to live chain-free since she had a history of aggression. But shortly after the other elephants went chain free, Kirti Kali did as well. She proved to be a star resident of chain-free living, remaining calm, responsive and nonaggressive.

Last winter, Kirti Kali’s health deteriorated, which meant she no longer had to give rides. Tarps were erected around her stable to help block the cold wind, and EAI provided a coat to keep her warm.

This spring, Kirti Kali died after years of suffering from the human strain of tuberculosis. Her contribution to conservation was as great as her suffering. She was almost 60 years old. 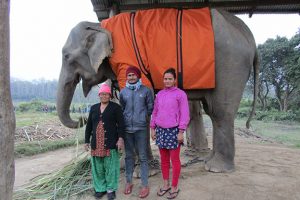 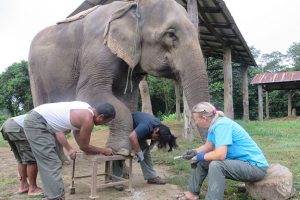 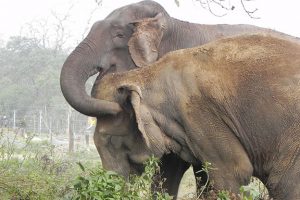 Sundar Mala was another wild-caught elephant who spent her entire captive life working anti-poaching patrols protecting Nepal’s wildlife. Although age is sometimes difficult to confirm, I was told that she was close to 60 years old when we first met. She was severely thin and suffering from foot disease.

In 2015, after living chained in isolation most of her life, Sundar Mala was released into a chain-free corral built by EAI. She and Oma Kali, a senior elephant who had been crippled by a wild bull, bonded instantaneously and remained inseparable until Oma Kali died two years later.

Sundar Mala was the first recipient of a winter coat. It took some convincing for the government to grant permission for EAI to provide the custom-made garment, but thanks to Sundar Mala’s complete acceptance of her coat, many other elephants in need have since received them as well.

During our bi-annual foot trimming visits, Sundar Mala was always the first client. She was unable to lie down, but quickly learned how to place her feet on a platform so that her nails and foot pads could be trimmed. It was always a group effort, with two to three mahouts and me gently maneuvering her feet into place and trimming, while yet another person provided treats, her favorite part. Sundar Mala’s calmness, cooperation and gentle engagement was humbling.

Last winter, I heard Sundar Mala’s health was deteriorating. We offered support in the form of supplemental food and a new coat. She wore her coat with a sense of pride, posing with her team of mahouts and well wishers. With the deepest sadness, I learned Sundar Mala just passed away. She was reportedly in her mid-70’s.

I can only hope the sacrifices made by these and other elephants we have lost does not go unnoted. They are heroes of the greatest magnitude, wild-caught elephants who rose to the challenges forced upon them. Their contributions to the success of human endeavors cannot go unrecognized, nor the cost they paid in their service to humans and other animals.