Over the past several days it has become crystal clear that Tarra is in charge of how her bonding dance with Bo proceeds.

Mornings seem to be the best time for her to be interested in Bo’s attention. For Bo, any time is a good time, but he is very sensitive to and respectful of Tarra’s need to determine when, where and for how long they interact.

It begins with Tarra approaching Bo, casually acting like she is simply grazing in his direction. But one look at her face and you can see she is calculating her next move. Not in a bad way: she is light and comfortable, obviously not afraid of Bo.

And Bo has never given her a reason to do anything but trust him. He never encroaches on her space without her permission, doesn’t attempt to take her food and crowds her only when the water is on and they can drink directly from the hose. (They both prefer flowing water opposed to standing water. Who wouldn’t?)

This morning I was not at the trough with the hose. Rather I was glued to the EleCam, so excited about the display of interest and affection being shared between Tarra and Bo. As we’ve observed in the recent past, Tarra initiated the exchange, slowly backing up until her rump was touching Bo, who responded by gently running his trunk across her body, reaching for and smelling her ear.  If he were a breeding bull he might, at this point, have tried to mount her. But instead, he moved up next to her so their bodies were touching, as their trunks explored with feathery touches, both of them calm and receptive.

This display of exploration and interaction continued for about 10 minutes when the need to graze overtook them both and the moment was gone, but not lost or forgotten.

The EleCam is such a valuable tool, a thrilling opportunity to be a fly on the wall to Tarra and Bo’s blossoming relationship. They’ve been together for 5 weeks now, which is not a long time for their relationship to have developed to this level. It is very heartwarming. 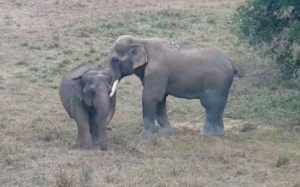 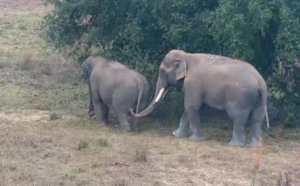 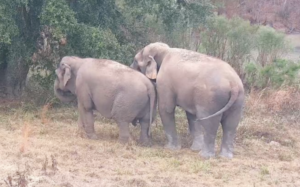 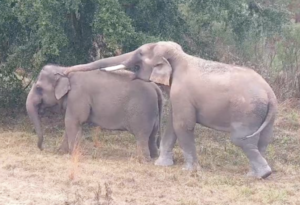