After feeding Bo and Tarra this morning I was mesmerized watching them on the ELECAM. They were fed closer together then usual, so I was curious how both would respond. They spent a good hour savoring their produce, grain, and since the winter pastures is a bit sparce, they also had a pile of hay each.

After both had finished and were now grazing, I noticed that Tarra, instead of wandering off to her favorite grazing place, was looking over at Bo. Then surprisingly she started moving in his direction. This was a first in the relationship dance. Usually Bo is the one who approaches first, but this morning it was Tarra who was showing interest.

Now some might say, oh, she wanted to see if he left any food and I considered that. But as I watched I saw that Bo had finished eating and was already grazing in another area. And Tarra was moving directly towards him, not towards the area his food had been dropped.

Then for the next 10 minutes Tarra continued to slowly move in Bo’s direction, unhurried step by step, stopping to occupy herself with grazing and watching Bo’s reaction. Bo appeared quite aware of Tarra’s interest, and he played it cool. He glanced over at her every few steps she took, all the while continuing grazing.

Tarra appeared cool, calm and collected. How could I tell? Well, her body was relaxed, she wasn’t holding her head high, and she was approaching Bo head on. Tarra is known for backing into a situation when she feels unsure of the outcome. Maybe because that way she can make a quick exit if needed. But here she was, walking slowly, calmly towards Bo, apparently feeling quite secure. Bo was amazing. He is so savvy. Raised around a large family of elephants, Bo learned social skills. He uses these skills with Tarra and is working magic with her.

After about ten minutes Tarra closed the distance between them and was standing right next to Bo. I realized that I was holding my breath, so excited about this development, and had to remind myself that I was watching on the ELECAM, so breathing in no way could disturb them. I must have called Suzanne 4 times saying “Are you watching this? Are you recording this? Wow, oh wow.” Suzanne just laughed.

This continuation of the relationship dance was glorious, precious and exciting. After about fifteen minutes Bo took a few steps closer to Tarra, they stood side by side, just being together. Then with no urgency or even a sense of dismissal they both started grazing in different directions, Tarra to her favorite area around the giant oak trees and Bo in the wide open pasture by the pond. It was another good day in Bo and Tarra’s world. 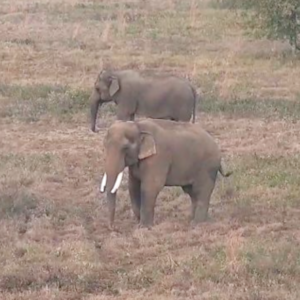