Elephants in the U.S. | Sanctuaries | Tarra 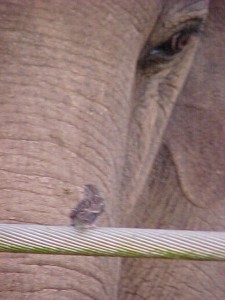 The story that goes with this touching photo taken in 2001 is equally amazing. I went out to the back of the Phase ll barn and found Tarra staring at the fledging on the horizontal corral cable. I was without camera and said to Tarra, “Don’t move, don’t scare it — I’m going to get the camera.  I’ll be right back!”

I ran back the length of the barn and up the stairs, found my camera, ran back down the stairs and out to the back of the barn. It had to have taken me two to three minutes. When I came back around the corner, Tarra was standing perfectly still, in the exact same spot as when I left her. I swear she was holding her breath.

I was able to take three photos before the fledgling flew off.

I praised Tarra for standing so still and for not trying to touch the baby bird, which I could tell she was dying to do. Her eyes were still as large as saucers, sparkling with excitement. She squeaked, took a deep breath and let out a piercing trumpet.

Another magical moment with Tarra.