Wow what a day, I mean what a week! It was harder than expected to leave Mee Chok, Lom and all the magnificent elephants at BLES. I hopped on a plane from Sukhothai to Bangkok after sharing some final moments before takeoff with Kat, Hope and two very special BLES supporters. 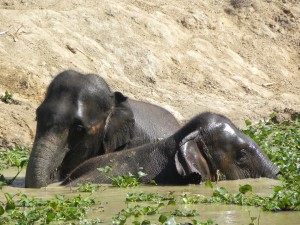 Upon landing, I found myself on an hour-long drive across town to the Southern bus station, followed by a three-hour bus ride to Kanchanaburi. Whirlwind is a good description.

I keep forgetting to factor in things like: it can take two hours to drive 20 miles in the city traffic. Always interesting, there is never  a dull moment with tourist buses blasting music from the front of the cab…outside not inside, motorbikes snaking their way through the tangled vehicles and cars, cabs and trucks filling in every available gap. And bus stations can be a well-lit street corner or a three-story complex the size of a football stadium. Oh, what a thrill…and I made all of my connections with time to spare.

Kanchanaburi was buzzing when I arrived, locals eating in the brightly illuminated food stands lining the sidewalks. I was taken a bit off guard when the bus stopped, everyone exited and I saw my duffle bag sitting in the street next to the bus. Upon exiting the bus, a kindly sokow driver approached and asked where I needed to go.

Here’s the other thing that really amazes me: these taxi, tuk-tuk and sokow drivers all seem to know every guesthouse, hotel and restaurant in their city. My poor pronunciation does not prevent them from finally figuring out what I am saying, no matter how much I butcher the word. Patient and kind is how I would describe the Thai people.

My latest adventure was not over upon exiting the bus. I got to my guesthouse, the easy to pronounce Bamboo House, to find out that my reservation had not been entered it into their reservation book. It seemed that this is not a rare occurrence. The owner gently drilled me on the exact time and day I had called to make my reservation and I soon realized she was trying to find out which staff member keeps forgetting to write down reservations. It was nearly midnight and I did not have a room but, really, there was no reason to get upset. If there is one thing that Thailand has, it is an abundance of guesthouses. I resorted to what has served me well in Asia: I asked for help.

The proprietor, who had been awakened by the night watchman, was standing in her nightgown and robe behind the counter, obviously mortified by the mistake. She kept apologizing as she hurriedly made a call to another guesthouse, which I found equally as charming. Within minutes, a motorbike with sidecar and recently-awakened-from-sleep driver arrived. I was ushered, bulging duffle bag and all, onto the narrow side-car platform that serves as a seat for passengers. With much copchuncaws (“thank you very much”) and respectful bowing, I was off to the Morning House, my home for the night.

In the morning, I have an appointment with the founder of Elephants World, a new facility about 30 minutes outside of Kanchanaburi. I have heard little about the place and am anxious to see it firsthand.

The young Thai founder of Elephants World is a veterinarian. His project is in partnership with a local man who supports animal welfare and wants his land to be put to good use for elephants. Animal welfare is not an attitude that you might think of when referring to the Thais, but I believe attitudes are beginning to shift. The land owner is known to rescue young water buffalo whose mothers are being sent to slaughter. I asked what he makes the buffalo do and was told by Dr. Prasitphol that he makes them “walk and eat”; translated, that means that he allows them to just be buffalo. Apparently he and Dr. Prasitphol also have a soft heart for stray dogs, because together they have rescued and care for nearly 100 street dogs at their perspective homes.