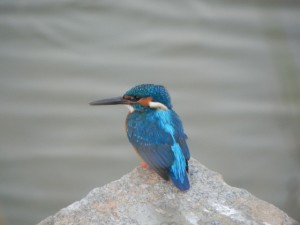 One of the first birds I photographed on Elephant Lake was this stunning Blue Eared Kingfisher (BEK). The little guy may be small in stature but he has a huge attitude.

When I set up my lakefront office I was unaware of its real estate value to the local winged fishermen. For two days after my arrival, BEK fished from a nearby tree but, on the third day, a flash of blue caught my eye as he landed on a soiled rock jetting out of the dam wall only a few feet below me. The bird droppings on the rock and his territorial behavior made me realize that my outdoor office was his preferred fishing location.

The first evening he was brave enough to claim his fishing perch, he kept cocking his head in my direction and bobbing his body up and down wildly — all 5 inches of him — in a way that could only be interpreted as “go away.”

I understood what he wanted but hoped that diverting my eyes would suffice. I remained perfectly still and completely quiet and he soon turned his attention to dinner. Within minutes he caught his first fish, a glistening slender silver catch easily twice the length of his beak. Returning to his rock jetty perch he swallowed the fish in one gulp, but only after bashing its head on the rock. The head bashing was kind of shocking, but it was quick and precise. I don’t know why I assumed that all fishing birds eat their catch live.

I have been working from my lake front office for nearly two weeks now and BEK and I have settled into a very comfortable pattern. I arrive early to avoid disturbing his routine, respectful of the window of time when bugs land on the water, fish swim to the surface to feed on the bugs and the blue eared wonder dives down and snatches a meal. I admit to being intrigued by the feeding process but divert my eyes during the head bashing.

While I download emails and catch up on communications, my blue eared neighbor goes about his business, hardly paying attention to me. But I can’t help staring at him when he is not looking, he is so irresistibly stunning.