thinking about the big picture 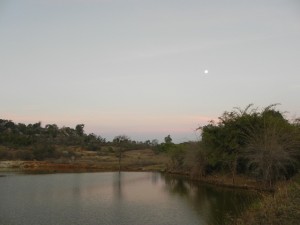 Things are progressing well with the care center — lots of discussion, meetings and scouting the land. But this time around the process is quite different from when my Tennessee sanctuary dream was becoming a reality. This time things are moving slower, every step evaluated and reevaluated by the team of people involved.

Vishnu is well respected for his conservation efforts by area property owners. At a meeting yesterday I learned that his land is unique to the area as he is honoring and restoring the forest with no motivation of capital gain. Apparently, over the years, many have tried to persuade Vishnu to turn the place into a high-end resort, but he has resisted all offers.

I love the fact that the land has been honored, forest replanted, wildlife respected and only limited numbers of humans allowed to bird watch and escape from the city.

Vishnu would be the first to admit he never imagined his restoration would benefit captive elephants. But there is a low-level, nearly undetectable hum here, like something is ready to unfold, blossom or be born. The land is ready to serve elephants again.

I am intrigued by what I am learning about the ways of wild elephants in a semi-urban environment. The fact that they can avoid trouble is nearly inconceivable with the degree of human encroachment surrounding their habitat. Putting myself in their skin is frightening. Every step they take brings them too close to human settlements. Everywhere they turn there is a road, a village, a rock quarry. They have no space and no safe haven; they must spend a great deal of time stressed by this mounting pressure, no doubt resulting in the same types of illness anyone experiences when exposed to constant low-level stress.

Being an optimistic person by nature I will not say the situation for wild elephants is hopeless, but being realistic, I admit it would appear that their chances of survival are slim. A major shift in the universal consciousness regarding our planet, resources and all life would need to occur, and quite soon, for mega vertebrates such as elephants, to survive in a free state on our planet.

Not a day goes by without horror stories regarding elephants, both captive and wild, making headlines worldwide. In India alone, several stories appear daily, chronicling human/elephant conflict, elephants mowed down by trains, buses and trucks driving through national forests, elephants electrocuted on tea garden estates by live electrical wires left dangling intentionally to curb trespassers. Ganesha is alive in the hearts of the people in Asia but the connection to his live counterpart seems to have been severed.

To date I have not seen a wild elephant in the forest bordering the care center, and honestly I believe I prefer not to. I can only imagine the toll the challenge of survival has taken on them. Where I would hope to see a calm and majestic inhabitant of the natural world, I am afraid I would see someone much different, a pale image of who s/he was before the human madness overtook their well-balanced world.

The care center will be a beacon, a haven for a few needy elephants and an example for other conservationists to emulate. But time is not on the side of the elephants, captive or wild. I can’t say for certain that our small project will change reality for elephants…but like I said, I am an optimist and stranger things have happened.