While daydreaming about Tarra……

I recalled our first romp on a pristine beach in Santa Barbara, CA. Tarra was a spunky youngster, small by elephant standards, full of playful energy. It was early morning, the sun was just lighting up the southern California sky and the beach was surprisingly empty. Like kids off on a grand adventure we climbed over the dunes that divided the highway from the beach beyond. Tarra sunk to her knees in the dry sand with each gangly step, leaving cavernous holes in her wake.

Abandoned volleyball courts lay down the beach to the left. The water’s edge was active with sandpipers plunging their beaks into the sand like tiny oil derricks. With an excited trumpet blast Tarra bolted toward the big blue ocean, dragging her toes in the wet sand as she ran. The resulting gouges filled in with each consecutive wave, erasing any trace of her presence.

Tarra enthusiastically ran toward the ocean as the water receded. But when an underdeveloped wave crashed at her feet, she screeched to a halt and back peddled awkwardly. Squeaking gleefully, trunk curled up under her chin, head pulled down low, she got eye level with the wave. As it once again receded, her confidence returned. Ankle-deep in the foamy swirl of sand and salt water, she did not notice the new wave building. It formed quickly, rising like a cobra from the ocean floor and slapped her broad side with a crack. Caught by surprise, Tarra’s eyes flashed wide. She stood frozen for a split second, staring straight at me. I could not help it, I broke up with laughter. 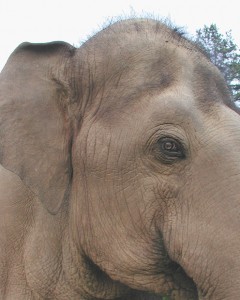 Recognizing the mischievous look on her face, I started running down the beach to get the jump on our ever familiar foot race. Tarra came tearing out of the water, running as fast as her stocky legs could drive her, trunk and tail fully extended like a bird dog on point. Our foot race ritual was a bonding exercise. Sometimes I let her win and other times she let me. This time it appeared that she was determined to be the winner. Slowed by the soft sand caressing our ankles, we raced down the beach, neck-in-neck, until she surged forward in a final sprint, leaving me in her dust clinching my sides in laughter.

Only then did I notice we were being watched. A uniformed man standing some distance away called out, “Miss, you cannot have an elephant on the beach.” Jokingly I responded, “Sorry, I didn’t see the sign.” 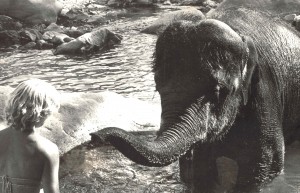