Elephants in Asia | Other animals

During this trip to India I basically sequestered myself in Bannerghatta, singularly focused on the care center project. As my pending departure loomed I realized that I had failed to visit other projects. There really is so much to see—elephant welfare-wise—in India, I was kicking myself for not setting aside time to further my education.

Literally days before my visa was to expire I received an email invitation from Kertick and Geeta of Wildlife SOS to visit their facilities in Agra. True to my nature, I hesitated at first — not because I did not want to visit their bear and elephant facilities but because my flight was already booked and I did not want to pay the flight change fee.

Fortunately, my flight from Bangalore to Kathmandu had a plane change in Delhi, the airport I needed to fly into for Wildlife SOS. I was able to postpone the second leg of the flight, giving me almost three days to spend with the Wildlife SOS staff at both their bear and elephant facilities.

The visit would have been perfect if Kertick and Geeta were in the country but they were in California, presenting at the PAWS elephant summit and other venues. In their absence, their expert staff took care of all arrangements, which made my visit very comfortable. I hope Geeta, Ketrick and I will meet in the next few weeks, as they plan to come to Nepal to observe my work in Sauraha.

The work Geeta, Kertick and staff have done to rescue and rehabilitate dancing bears is nothing short of miraculous. The facilities are well designed, with expansive yards, spotless night houses and a dedicated and knowledgeable team of caregivers and veterinarians.

I was in the education hut sitting on a couch viewing one of many informative videos about dancing bears and the plight of other Indian wildlife, when something—light as a feather—touched my shoulder. I assumed it was an insect and reached up to gently brush it away without taking my eyes off the screen.

Without a sound or advance warning more than the gentle shoulder tap that I mistook for an insect, something much heavier than an insect, maybe four or five pounds, warm and hairy, jumped onto my head. I froze and whatever-it-was froze. I had no idea what it was. It was completely silent and warm, grasping my hair in what felt like many tiny hands.

Not being able to see what was perched on my head was indeed unnerving, and no one else seemed to be around. I trusted that I would not have been put into this room alone with anything dangerous so I considered my options. Yelling for assistance was out. Reaching up to remove my head ornament seemed risky. And waiting for someone to come to my rescue seemed unrealistic.

My decision was to slowly reach towards my head to see what would happen. The “thing” leapt from my head across the room to a chair and then back to my head again. Her movement was quick but as she was flying through the air getting ready to land on my head again I saw the “thing” was a young capuchin monkey.

Even though I am comfortable with captive wild animals I respect them by keeping my distance because I feel interaction is not in their best interest. But this little creature obviously felt differently. She leap frogged from her chair to my head a couple of times and then remained perched on my head. With no staff in sight I realized I would need to deal with this little bundle of curious energy on my own. I was not opposed, I just did not want to do anything wrong, not having been around a primate before.

Gently untangling my hair from her tiny fingers she allowed me to remove her from my head and lower her to the couch. We looked at each other—too cute is all I can say—as she ever so confidently climbed into my lap, took hold of my hand and placed it on her belly. There was no misunderstanding this gesture — she wanted a tummy rub.

I admit to being in heaven while at the same time wondering how I could justify having a monkey in my lap. In the end I did not try to justify it, I simply accepted the experience as the gift it was and enjoyed every second she remained in my lap. A few minutes later one of the resident Great Dane rescues showed up, sending her dashing from the room.

Escorted by staff veterinarians we first toured the bear facilities and then drove a short distance to the temporary elephant facility. Set up on five or six acres of land, the elephant facility is a good start for the rescued elephants. The facility is well designed, with stables for shade and nighttime, sand piles to avoid hard surfaces, a steel corral stable for bulls and a circular concrete pool that is the high point of everybody’s day.

It was amusing to watch Rajesh, a beautiful full-grown bull with massive tusks, submerged for hours, gently bobbing around in the pool. 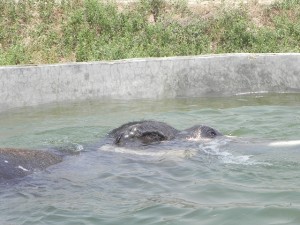 I did a little foot care and target training to give the vets, mahouts and elephants an idea of what was to come in the future. The mahouts have already changed how they work with the elephants to a great degree. The harsh tone and demanding commands are still used but the ankus and infliction of pain are not. I could see the mahouts are being won over to other ways of working with their elephants — it was exciting to see the progress they have already made. 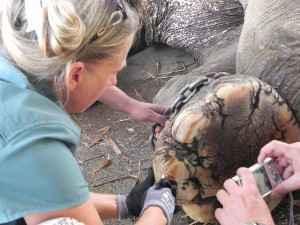 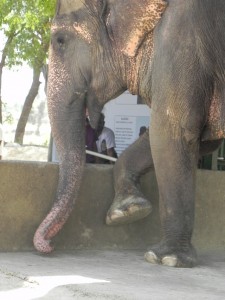 Kartick and Geeta have plans to move the elephants to a very large tract of land. I have decided to accept their invitation to be involved in this project and recommend that you visit their site and support their work for rescued bears and elephants.