Check the Elephant Cam to see what Bo is up to right now.

Yes – the day we’ve all been waiting for is here!

We are thrilled to announce that Bo, a 34-year-old bull (male) Asian elephant, is Elephant Refuge North America’s first resident!

Bo is a magnificent Asian elephant in the prime of his life. A star performer with the George Carden Circus, he was born in captivity and is in excellent physical, mental and emotional health, a testament to the care George Carden has given him for three decades.

Bo was castrated when he was five years old (one of a very few castrated bulls alive today) so he has a calm temperament. 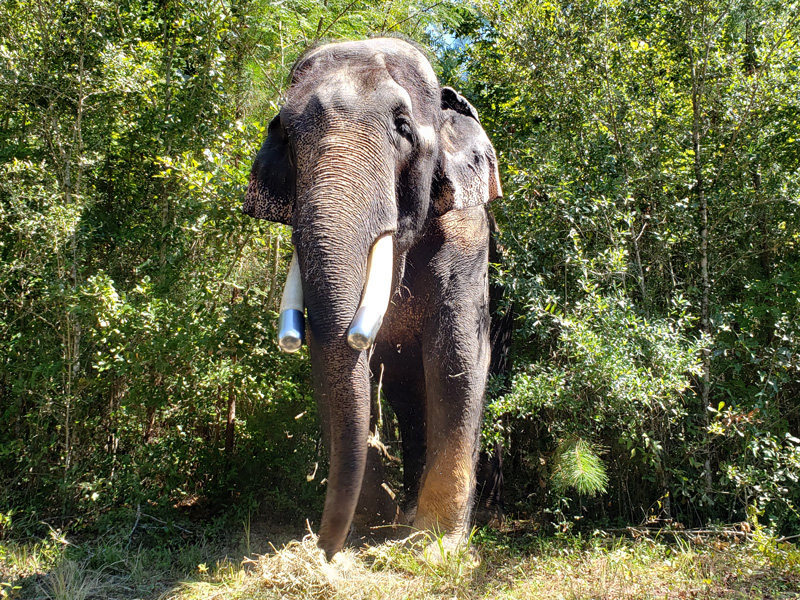 Why did Bo come to ERNA?

George Carden selected ERNA for Bo’s retirement because he wants Bo to have only the best! And we are delighted to comply!

When did Bo arrive?

What are Bo’s stats?

It’s hard to believe how much we’ve accomplished in a few short weeks to prepare for Bo’s arrival. We:

Which brings us to the fence…

We designed the existing habitat fencing for female elephants.

But bulls are larger and stronger! To make ERNA a safe home for Bo, we need to reinforce the habitat fencing with additional steel pipe and install a secondary fence for added security. Bo's habitat is 100 glorious acres of woods, pastures, streams and pastures. AND THAT'S WHERE WE NEED YOUR HELP!

Here’s how the balance breaks down:

Please help us give Bo the retirement he deserves! Donate now!

We also have a special wish list of things we'll need for Bo. Check Bo's Habitat Wish List for items you can donate.

Take a look at our live stream of Bo's habitat to find out.

Please click the play button if you don't see our live stream.

Our goal is to give our residents as close to a natural life as is possible in captivity. For Bo that means:

Check out our ERNA overview video to see
the landscape Bo will explore everyday.

Watch our video on ERNA's state-of-the-art Elephant Barn to see where Bo can come inside - if he wants to.

What is Bo’s history? Expand

Bo is a captive-born male elephant, the offspring of Vance and Sue, members of a breeding herd of elephants owned by Roman Schmidt. At one year old Bo was purchased by Cheryl Shawver of Animal Actors of Hollywood. By five Bo had become unmanageable and was sold to George Carden. Understanding that the future for an aggressive elephant is bleak, George decided to have Bo castrated. The surgery was a complete success. Bo has lived with George’s family for the past 30 years.

Why is Bo being retired? Expand

Bo is a highly valued circus performer in the prime of his life. He is not old, not sick and is still a sought-after performer. With a possible life expectancy of 70 years, Bo could continue to perform for decades.

But in a world in which retirement is a novel concept, George Carden believes Bo deserves a good retirement. “Bo is family to me and deserves to retire to a beautiful place designed to give him a good life,” says George. “I want him to have the best, which is why I want him to live at the Refuge.”

Why do male elephants require stronger fencing than females? Expand

Male elephants are significantly larger and stronger than their female counterparts. Many males grow long ivory tusks, which in the wild they use to rip bark from trees, dig holes for water and inflict pain on an aggressor by hitting and poking him.

In captivity bulls can use their tusks to dismantle, damage and destroy just about anything we can build. As a result, habitat fencing is designed to withstand a male’s size, strength and tusks.

What is ERNA? Expand

ERNA is Elephant Refuge North America, an 850-acre natural habitat refuge designed specifically to meet the needs of captive-held elephants who have spent their entire lives in zoos and circuses. As a true retirement home, elephants at ERNA have autonomy and companionship in a soul-restoring habitat so they can rediscover their elephantness.

How will Bo be transported? Expand

Since Bo has performed with the circus for decades, he’s a seasoned traveler complete with his own semi-trailer. George Carden, Bo’s lifelong companion and champion, will accompany him on the trip to ERNA, looking after Bo’s every comfort, with lots of hay and pit stops to ensure he is hydrated and comfortable.

Males are not completely solitary, but they did evolve to spend a great deal of time alone. Bo is currently alone and will be for a short time at ERNA. But soon he will be joined by other elephants.

Why does Bo have metal caps on his tusks? Expand

The custom fitted stainless steal caps on the ends of Bo’s tusks protect them from cracking and breaking.