While in Thailand, I spent one week with Alex Godfrey and a passionate group of volunteers, participating in the Elephant Nature Foundation Surin Project.  The project is grand, with much planning, dreaming, and manifesting ahead. Such a project requires a special person at the helm. The Elephant Nature Foundation has found that person in Alex Godfrey.

A world traveler, Alex exudes competence beyond his twenty-something years. His youth serves him well as he has not been soured by disappointments; he sees no mountain too high to climb. I am confident that this talented young man will continue to have a profound impact on the welfare of captive elephants. The success of his Surin Project will undoubtedly be a model for captive elephant facilities of the future.

In its infancy, the ENF Surin Project is providing an alternative lifestyle for 7 elephants and their mahouts living in a government-run elephant “camp.” The project operates inside the physical boundary of the greater government program, the Surin Project, designed to remove begging elephants and their mahouts from the streets of big cities in Thailand.

As part of the government-run program, each elephant owner is given a small spot of land for his elephant. The government pays each owner a monthly stipend to keep his elephant at the camp during the day, instead of begging on city streets. Additionally, the government has created a show arena at the camp, where elephants perform for the public twice daily. There is nothing unique about the shows — tricks, elephants painting, and elephant rides — the standard fare. Elephants who perform in the shows receive additional funding, another incentive to remain in the camp. 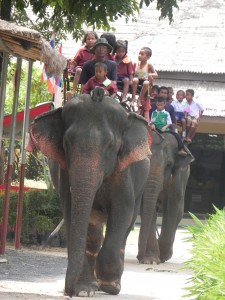 In an effort to gain her support, the government invited Lek, founder of the Elephant Nature Park (ENP) north of Chiang Mai, to participate. But although the ENF project operates within the government program, it could not be more different.

The ENF Surin Project aims to shift the paradigm, creating an elephant friendly program that will benefit elephants, country, and elephant enthusiasts. It is well on its way to accomplishing its goal. With ingenuity and sheer determination, the ENF Surin Project demonstrates a healthy alternative to the exploitive practices so prevalent worldwide.

The project centers on several elephants and their human families. Provisions are provided for elephants and humans; the program is, by design, meant to be self sustaining. Funds and labor provided by volunteers are the backbone of the project. Volunteers from all over the world pay to spend a week immersed in camp culture. In personalized home-stay fashion, volunteers stay in a private room of an elephant’s family home. Bathrooms are modern and the accommodations are clean. Volunteers are invited to participate in the family’s daily routine, which includes care of their elephant(s). 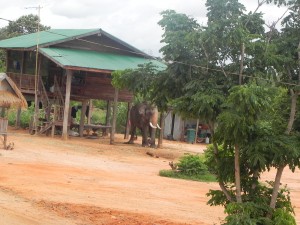 The concept is perfect. The volunteer immediately becomes part of the family with an opportunity to learn firsthand the trials, tribulations and joys of Thai living and captive elephant care.

This program is focused on putting elephant welfare first. The elephants benefit greatly because they are not forced to undergo intensive and continued training in order to give tourists rides and perform in shows. Instead, they are taken out into the fields and wooded areas during the day. While volunteers engage in soil preparation and planting elephant food crops such as “elephant” grass, bamboo and trees, the elephants are chain-free, allowed to engage in species-specific activity.

Eating dominates an elephant’s life. Elephants spend nearly every waking hour — 20 hours each day — searching for, selecting, collecting, and consuming vegetation. It was awe-inspiring to watch these elephants forage for food while we prepared land and crops for their future.

In a culture in which bathing is a ritual, it is not surprising that elephant bathing is customary. Nothing is more rewarding than to sit on the bank of a river or pond when a family of feisty elephants takes the plunge. Age is not a limiting factor when it comes to playing — water brings out the kid in all elephants. They roll and tumble together, calves clamoring over others, splashing with their trunk and feet, flopping onto their sides in glee, causing a wave that swamps others.

The elephants participating in the ENF project are the lucky ones. Others in the camp — close to 200 — stand chained by one leg, many out in the direct sunlight, swaying back and forth in an effort to escape mentally from their reality. 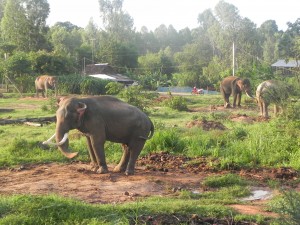 Knowing that the ENF has an opportunity to change the situation for other elephants is what drives Alex and the volunteers to do more. Continuing to develop this already stellar program is essential.

We owe the Elephant Nature Foundation, Alex Godfrey, ENP and all the volunteers involved a huge thank-you for their dedication. My sincerest hope is for the continued success and expansion of the ENF Surin Project. 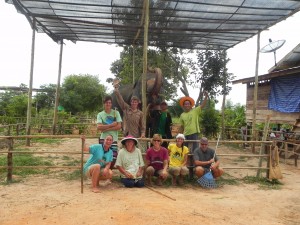