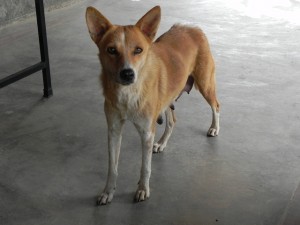 Well, I guess I’ve done it now. I will probably be arrested for dog nabbing.

Soon after arriving here, after Derrick abandoned me to return to his first home, a hungry suckling dog came scavenging around my place. I felt bad because there wasn’t anything for her to eat so I gave her a dish of soymilk. She was tentative and very apprehensive about allowing me even to walk past her. With her tail between her legs she’d scurry off to a safe distance from me. She would not take her eyes off me until I left the area.

Over the past two weeks her visits have become regular and more frequent. Lately she quietly stands on the threshold of my open door, calmly looking at me. I try to remember to cook more than I need so there will be leftovers for her.

She has also taken to spending more time just hanging out, most likely to spend time away from her growing pups. I knew she had one pup because I saw it as I walked through her village during one of my scouting expeditions. But yesterday I had a surprise.

When Momma dog came for her AM soymilk there were two, blue-eyed pups tagging along behind her. They looked to be no more than six weeks old; cute does not come close to describing them. They steered clear of me and one even let out what was supposed to be a ferocious bark to make sure I did not approach. Too cute.

Today when Momma dog stood in my doorway, patiently waiting to see if there were any leftovers, two cute faces peeked out from behind her. Their visit was not the surprise of the day; it was when I saw the pups playing on my porch—with no mom in sight—that I realized what she had done. Seriously, the pups were playing, let out one halfhearted whine when they realized Mom was gone, then plopped down by the porch step and fell fast asleep. 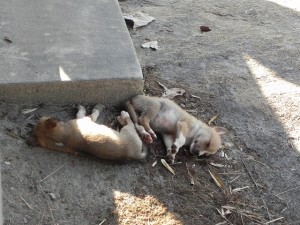 I looked for Mom but she was gone. We will see if she intends for this to be a permanent residence change or just an opportunity for her pups to get to know the neighbors. Either way, I hope their owners don’t think I puppy nabbed them.