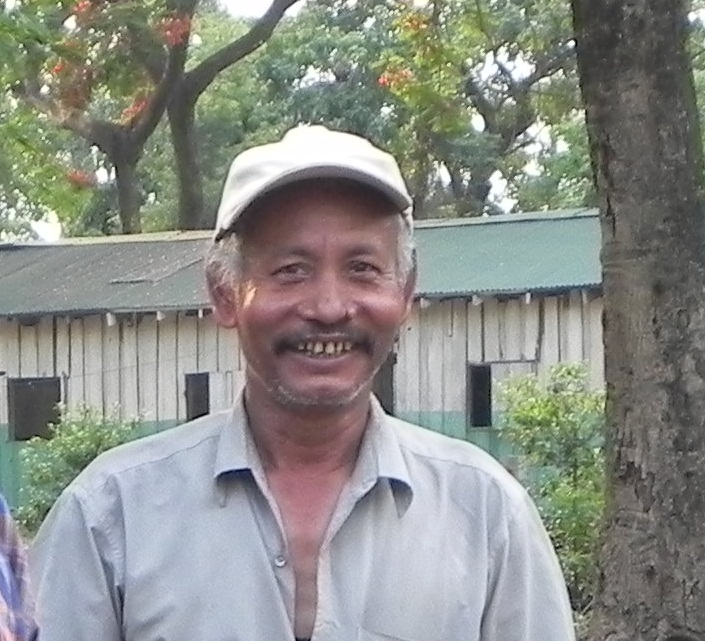 When Paspat, the mahout supervisor at National Trust for Nature Conservation, asked about a water trough for Sweetie Kali, I nearly fell off my chair. Seriously— his question was a shocker because captive elephants are not given free-choice access to anything in Asia. The belief is that allowing them to make choices will spoil them for their mahouts. The great fear is that if elephants experience a sense of freedom and are content, they will refuse to respond to their mahouts.

The fact that Paspat asked for a water trough reinforced my belief that he genuinely cares about his elephants’ welfare. Even in the United States— land of the brave, home of the free—many captive elephants are not given free-choice access to water.

I was deeply touched by Paspat’s request—so outside of the normal thinking of mahouts—and I assured him I would make it happen. The grin that spread across his face when he understood my response was priceless.

It struck me that this might be the first time Paspat was in a position to create a practice contrary to tradition. A chill ran up my spine as I looked long and hard at this man, who supported the chain-free yard concept and suggested free-choice water. Even though we do not share one word of a common language, I felt the connection loud and clear.

After securing the required authorization to add a water trough to Sweetie Kali’s yard, I posed my challenge to Kiran, the veterinary tech/nail cutter extraordinaire. He was excited to help.

I explained what I needed: a sturdy, bathtub-shaped, concrete drinking trough, with inlet and outlet holes, heavy enough that Sweetie Kali cannot knock it over.

In his broken English Kiran said he knew a man who could make the trough for us. So off we went on his motorcycle, zooming down the pothole-rutted village road toward the other side of town.

We arrived at the concrete factory. There was a yard full of custom-made concrete posts for building supports and culverts used for septic tanks but I did not see anything that vaguely resembled a water trough.

I also did not see a single person.

Kiran parked his bike and charged over to a three-sided shack, calling out to someone. There was a man inside who was fast asleep.

Kiran entered the building without so much as knocking. The man, who was lying on a thin mattress on a wood-frame sleeping platform, was the soundest sleeper I ever saw. Kiran was nearly yelling—and the guy did not move. It was only when Kiran shook him that he awoke.

Midday is nap time as it is too hot to do much else. The bewildered look on the shopkeeper’s face was not as result of being woken abruptly but out of surprise to see us out and active in the sweltering heat.

The man rubbed his sleepy eyes as he sat up, trying to understand what Kiran was asking. I watched—which is how things work when you don’t speak the language—once again ever thankful for Kiran’s willingness to be my translator.

Finally the man seemed to understand what we wanted and began asking questions. Kiran included me in the three-way animated conversations, complete with crude drawing on the shop’s dirt floor. We decided on the width, length, height and wall thickness. I kept emphasizing to Kiran that it had to be heavy and strong enough that Sweetie Kali cannot pull it over or break it.

We decided on a free-standing version because if the trough was ground-level, dirt would get into it.

There was much discussion about the wall thickness and amount of steel bar required to make it strong enough. Explaining the inlet and drain holes was a bit challenging. When I finally saw the shopkeeper’s eyes light up in comprehension, I knew he understood what we wanted.

I kept pushing for an estimate but the shopkeeper was reluctant to give one. He had never created a trough before and clearly did not want to underestimate the cost. After much prodding on Kiran’s part, though, we had a bid in hand and commitment that he would start on our project the next day. I was so excited!

How would he actually make it?

At no time during the process did I think to ask how he would create the mold for the trough. He would build a frame out of two by fours and plywood and pour the concrete in, of course. How else?

The concrete factory was halfway between Kiran’s house and Sauraha. He passed the shop each morning on his way to pick me up for foot trimming and kept me apprised of the progress. Indeed, work had begun immediately, as promised, with an estimated curing time of ten days.

The wait was excruciating, so after about five days I just had to check on progress myself.

When we arrived the yard was empty. My heart sank when I saw nothing that resembled a water trough. But as we drove slowly toward the back of the yard, which borders a neighbor’s cornfield, I saw it. 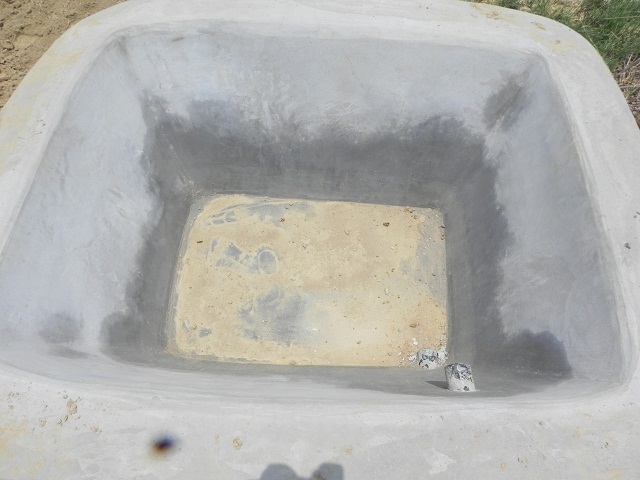 The mold was not what I expected but, considering available resources, it made perfect sense. A hole the exact dimensions of the outside of the trough had been dug into the earth, then the concrete was poured and molded by hand. It was stunning!

I could not help but ask how he would get that heavy trough out of the ground. Kiran laughed and explained that several men would pull the trough from the ground by hand and load it onto a wagon for delivery. I did not think to ask how it would be off-loaded into Sweetie Kali’s yard.

The day finally arrived and the wagon carrying the water trough was backed into Sweetie’s yard. All the mahouts gathered around, very willing to be of assistance.

I watched as the deliverymen discussed the best way to unload this 700-pound tub of concrete and steel. The weight and slick bottom of the trough made it a dangerous situation.

They decided to park the wagon at an angle, place a large tire on the ground just below the tailgate and slide the trough off the trailer onto the tire. I kept my nose out of the planning but two things nagged at me—the steep angle of the trailer and the weight of the trough. But, the deliverymen were in charge, so I kept my mouth shut.

Then it happened, catching the men by surprise. One tug on the trough sent it careening toward the open end of the wagon—and all the men. As it picked up speed, the men scattered. I heard my own “oh no!” pierce the silence as the trough became airborne, turned in mid-air and landed with a thump on its side, feet from its intended landing spot on the tire.

I scanned the scene to see if the trough had landed on anyone. The area was clear and everyone looked fine. But then I noticed Paspat rapidly exiting the scene with Babu Ram close behind. He was holding his hand high in the air. It was then that I saw blood running down his hand.

Paspat had caught his hand between the trough and the bed of the trailer, slicing across the top of it from thumb to baby finger. It was not a pretty sight.

Nandu fired up his motor cycle. Paspat climbed aboard, but not before washing the blood from his good hand so as not to soil the bike. With the entire group looking on in silence, Paspat was raced to the local clinic, hand held high above his head to help slow the bleeding.

The men wrestled the trough into place in a most unceremonious manner. The accident had dampened everyone’s spirits. 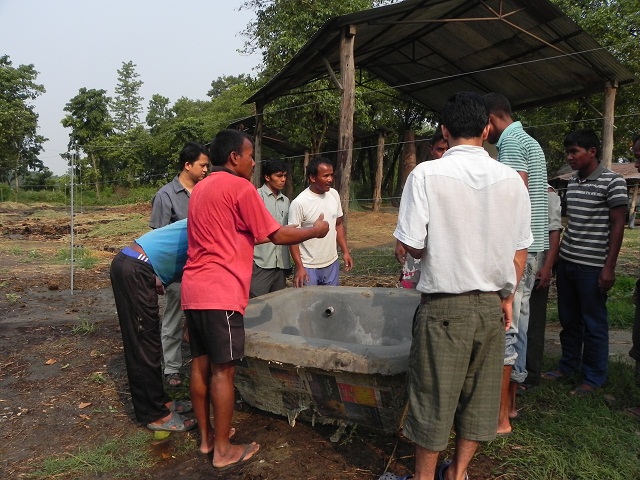 Within minutes we learned that Paspat had no broken bones, but the muscles in his hand were pressed back toward his wrist. The muscles were massaged back into place and he received twelve stitches. The biggest concern was infection. Paspat is diabetic so the doctor was concerned about how well he would heal.

More than a week has passed and I am happy to report that Paspat’s hand healed without complication.

As for the trough, it is a work of art. Every angle is perfect, all the surfaces smooth to ensure that Sweetie does not scratch her trunk and that it is easy to keep clean. I marveled at the amount of work that went into the mold and the craftsmanship it required. I could not have been happier. 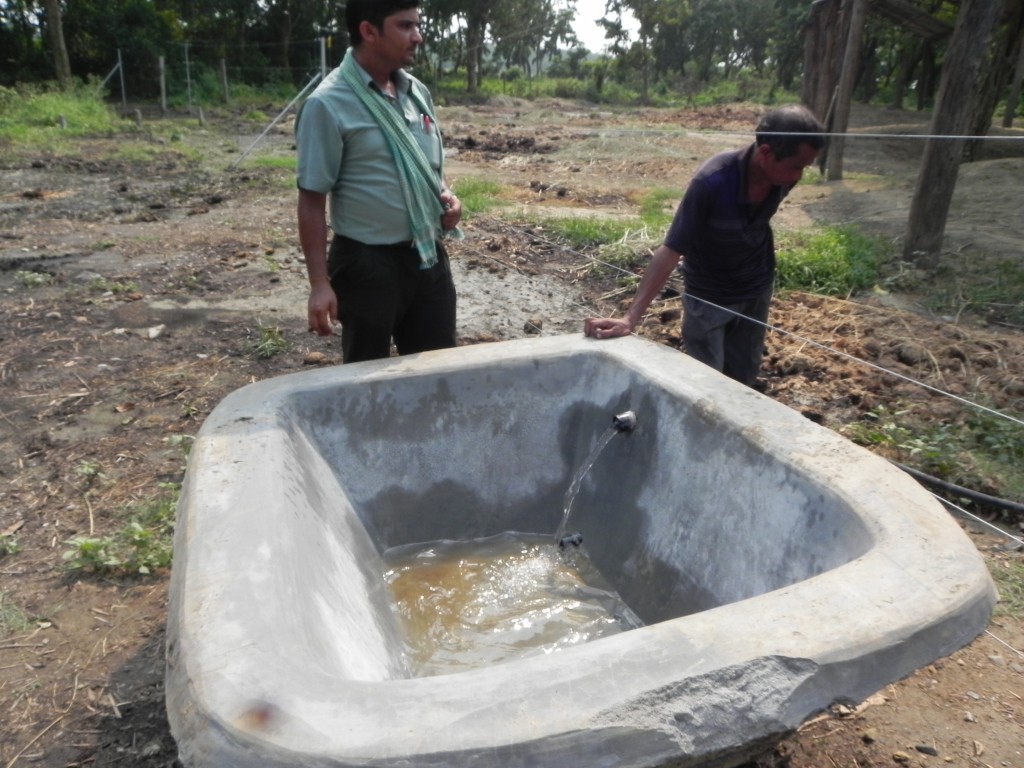 Sweetie Kali wasted no time making use of her trough. The mahouts seem to enjoy watching her almost as much as she enjoys splashing, bathing and drinking. 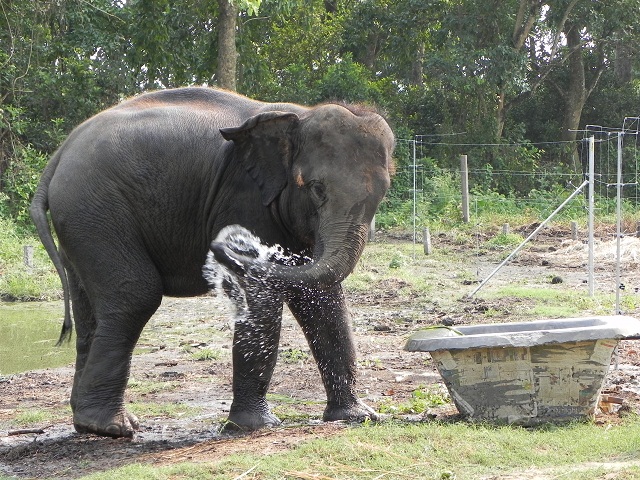 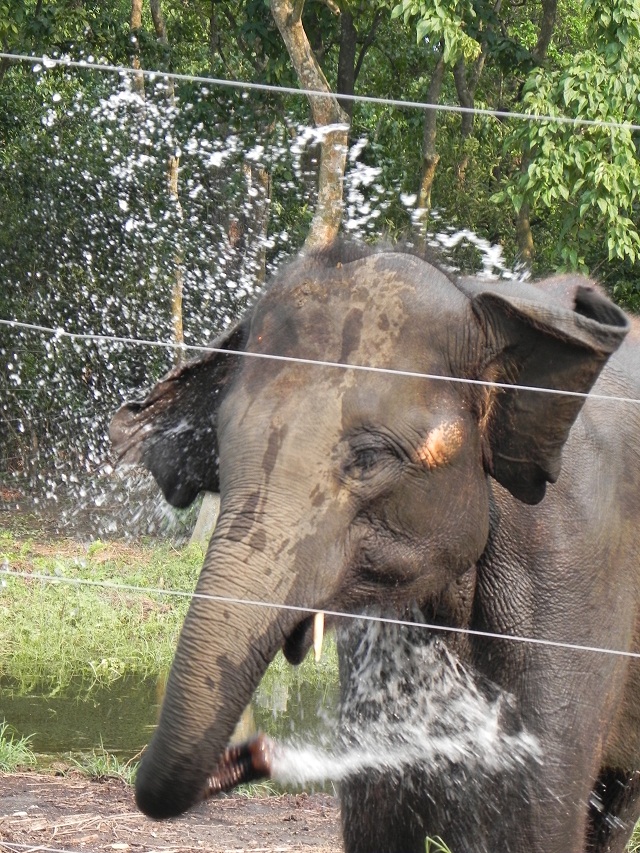 Some of you commented on the newspaper that covers the outside of the trough, making it look like papier mache. The newspaper was used to line the inside of the earthen mold to keep the concrete clean; now it’s nearly one with the concrete so the mahouts decided to leave it. 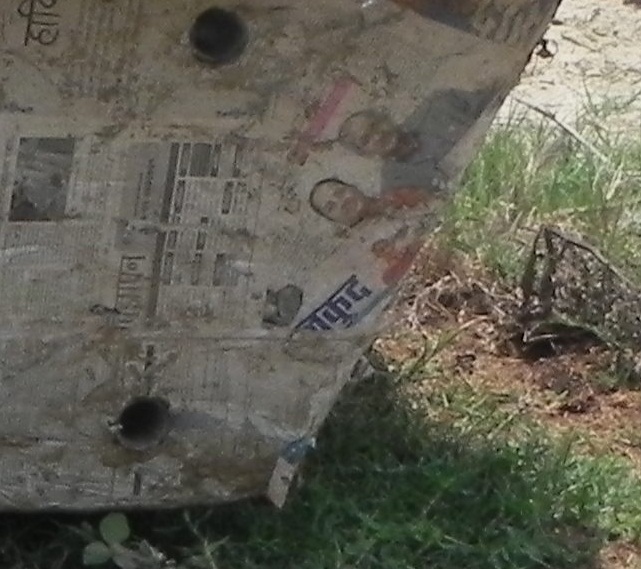 A huge thank-you goes to the mahouts for their willingness to try something new and to all the supporters who underwrote the cost of adding this trough to Sweetie Kali’s yard.

Thank you all so much.